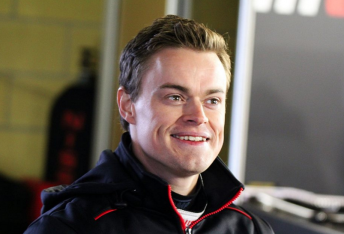 Within a matter of days, James Moffat went from facing the V8 Supercars wilderness to securing one of the fastest seats in the championship.

Excited by the prospect of race winning equipment, the 31-year-old faces the challenge of tackling highly rated team-mate and close friend Scott McLaughlin on equal footing.

Volvo marks the first time that Moffat will enjoy the relative simplicity of a two-car team in five seasons, having spent recent years in four-car efforts at Dick Johnson Racing and Nissan Motorsport.

SPEEDCAFE: James, congratulations on the deal. It must have been a relief to lock it in considering the level of uncertainty that you faced during the year?

JAMES MOFFAT: Absolutely. It’s probably always the case that every year there’s five or six drivers who come out of contract and end up replacing each other or miss out on a drive.

I was mindful of that and my priority was always to remain full-time in the championship. I feel like I’ve ended up with an opportunity that is as good as any as it’s turned out.

I’m obviously really excited about what 2016 may bring.

SPEEDCAFE: It’s no secret that you were looking elsewhere because Nissan couldn’t put something together for you. But it certainly doesn’t look like this is a step backward.

MOFFAT: For me it had just become obvious that staying with Nissan was something that was becoming harder and harder for both parties with having to find a budget to run the car and a few other bits and pieces.

I obviously had to look at what other options were out there and I certainly don’t consider going to GRM as a backwards step by any means.

They’ve proven over the last two years that they have a very, very competitive package that can run at the front and win races.

The prospect of being able to step into a car that is capable of that is something that I’m really excited about. SPEEDCAFE: The way the testing rules are, you’re probably going to have to hold onto that excitement for a while, because your first drive will still be a fair way away.

MOFFAT: Yes and obviously without the (compulsory) pre-season test, it’s a bit up in the air as to when I’ll drive the car, but I’m sure there’ll be an opportunity before Clipsal.

It’s clearly going to be a different car to what I’ve been used to the last three years, so I’ll have to make some adjustments, but I’ve got a pretty good team-mate as a benchmark.

That’ll hopefully help me fast track any adjustments that I need to make in terms of how I drive the car. I’ll have some solid data to look at and understand how it needs to be done.

SPEEDCAFE: Is that an attractive part of this deal, teaming up with a close mate in Scotty? It’ll be a bit of an adjustment going from having three team-mates to just one.

MOFFAT: That’s an aspect of it that I’m looking forward to. We already have a good relationship so we don’t have to worry about starting something fresh, we can just get in there and get on with it.

With no disrespect to the guys that have been in that car over the last couple of years, the #34 has struggled to be competitive.

We want to have the #34 and the #33 both competitive and pushing each other along. That’ll be a great thing for the team.

SPEEDCAFE: Are you expecting a culture change going in there as well? You know Scotty very well, but working for Garry will be something different. You’ll be given a new nickname to start with…

SPEEDCAFE: But Garry isn’t usually one to go for the obvious… (every GRM team member is given a nickname by Garry). 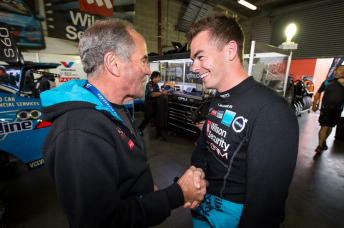 MOFFAT: Well I know that Scotty’s nickname within the team is a bit different to the nickname I use for him! (laughs)

Obviously Garry is a unique character and I guess the team reflects Garry in many ways. I’m looking forward to getting in there and experiencing it.

It’s going to be a smaller team than what I’ve been in for the last few years, but the fact that it’s two cars is a good thing.

If I couldn’t stay at Nissan, getting back into a two-car team is something that I was looking for. The GRM guys have run a pretty competitive outfit for a number of years.

SPEEDCAFE: One thing about GRM at the moment is that you’re joining them in what is the final year of their current Volvo deal. Is there any unease in your mind about that?

MOFFAT: No, not at all. It’s not something we’ve even discussed or really have had time to discuss.

The whole process with Garry was quite quick, I must admit, probably the quickest I’ve experienced between talking and doing the deal.

But it’s not something that worries me. Garry will be taking care of all that and doing what’s best for the team.

Hopefully Volvo continues. From the outside, it’s looked over the last two years that they’ve had a pretty good introduction to V8 Supercars.

Hopefully Scotty and I can continue that next year and give them no reason to want to pull out.

SPEEDCAFE: Obviously the year isn’t over yet, but how are you going to look back on this period with Nissan? In 2012 when this happened it felt like your big chance and it hasn’t quite transpired that way. MOFFAT: I’ll look back on it I’m sure with some good memories. I’ve made some great friends and had some unforgettable results, like the win at Winton and podium at Bathurst.

Overall it’s been frustrating at times with the package that we’ve had. It’s been through no lack of trying from anybody involved, but we’ve been behind the eight-ball, particularly with the engine.

Everybody would like to have had more success, but it’s probably a combination of things, some of which have been in our control and others that aren’t, have meant it hasn’t happened that way.

Really all I’m focussing on at the moment is to finish the year off as strongly as possible and go out on a good note with some solid results.

SPEEDCAFE: I imagine it’s actually made it even tougher to deal with the situation your team has been in when you’ve seen Volvo come in with Scotty and get results straight away.

MOFFAT: Yeah, it would have been nice if that was us, but that’s just the way it unfolded. Full credit to GRM and Volvo for doing what they have so quickly.

For us the whole package has just required a lot more work then what everybody was hoping for.

When you consider the back-to-back years of changing the aero and continuous engine development and work that’s gone into that, it’s made for some tough times.