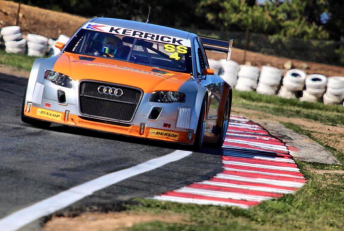 Jack Perkins aboard the Audi at Wakefield Park

A two-time Sports Sedan Series winner, Hossack injured both knees when he crashed a wingless sprintcar at Victoria’s Simpson Speedway.

“I don’t feel that I am yet back to the level overall that I need to be to get back in the car, and Jack is doing a fantastic job so it makes sense for him to finish the year off and hopefully get some great results for John and the team in Sydney,” explained Hossack.

“I am also on the list for follow-up surgery to take the screws out of my leg, and I am not sure where that will land at the moment so the last thing I would want to do is to have to pull-out unexpectedly if a slot comes up.

“I have been really pleased to see how the team have been going and the improvements in the car, and I will certainly be cheering them on over the weekend.”

After his debut in the car at Winton was plagued by a gearbox problem, Perkins took clean sweeps of the subsequent events at Ipswich and Wakefield Park.

Perkins will also head to Sydney off the back of a career first V8 Supercars victory at the recent Castrol Gold Coast 600.

“I am really looking forward to getting back in the car for the final round,” he said of the John Gourlay-owned Audi.

“The last two rounds have gone very well for us but the competition is only getting stronger so we are not expecting it to be a walk in the park by any means.

“Darren has been great. I picked his brains a lot before I first drove it, and every weekend I’ve had questions for him whether it be regarding driving style, car setup, tyre pressures or racing against the others.

“Wakefield Park was a bit different to the other events because the KSSS hadn’t been there for a few years so the car had moved on since they were there last.

“Hoss has been incredibly quick in the car everywhere but in particular in Sydney, so I’ve already looked through his notes and data and I’ll chat with him before the race weekend as well.

“I’ve had lots of feedback from V8 fans about how well the Sports Sedan has been going so that’s cool for the KSSS. Hopefully we can finish the year strongly for John and the whole team.”

A 12 car field has entered for Sydney, where Tony Ricciardello will aim to secure a ninth Sports Sedan title aboard his Alfa-Chev.

A total of 135 points remain available across the three race at the November 13-15 meeting.