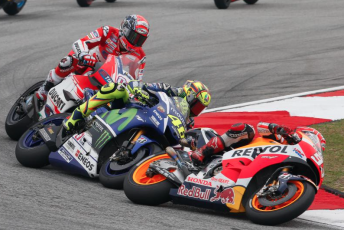 MotoGP has summoned all riders and team managers to an extraordinary meeting prior to this weekend’s title deciding final round at Valencia.

FIM president Vito Ippolito and Dorna Sports Chief Executive Carmelo Ezpeleta have called a meeting for Thursday to address the situation following the controversial clash between Marc Marquez and Valentino Rossi at Sepang.

The Malaysian Grand Prix incident has thrown a spotlight on the sport after Rossi appeared to kick Marquez, causing the Honda rider to fall during the race.

The fallout from the clash has continued this week after Rossi lodged an appeal to the Court of Arbitration for Sport in a bid to overturn the sanctions received from MotoGP.

Rossi was issued with three penalty points that will see the championship leader start Sunday’s final round from the back, hampering his chances of a 10th world title.

“Following the events that occurred at the Malaysian Grand Prix and further developments over the following week and given the exceptional circumstances, the Permanent Bureau of the FIM MotoGP World Championship, comprising of Messrs Vito Ippolito, FIM President, and Carmelo Ezpeleta, Chief Executive Officer of Dorna Sports, will summon all MotoGP riders and their respective team managers to address the situation on Thursday 5th November at 15.30 Local Time,” read a statement from MotoGP.

MotoGP has also taken the decision to cancel the pre-event press conference.