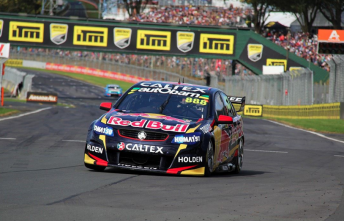 Progress made over the course of the season with engineer Grant McPherson has Craig Lowndes confident of taking a breakthrough win at Pukekohe this weekend.

Although gaining ground on leader Mark Winterbottom at the recent Castrol Gold Coast 600, Lowndes needs strong results at the remaining three events to have any hope of stealing the title.

Despite having 101 career wins to his name, Lowndes is yet to take a victory from 29 starts at Pukekohe.

Lowndes has not won at all on NZ soil, including the category’s five-year spell at the Hamilton street circuit from 2008.

“New Zealand hasn’t been a happy hunting ground for me but I’m really looking forward to it this year,” Lowndes told Speedcafe.com.

“Knowing that we’ve gone to other tracks this year and overcome problems that we’ve had in the past gives us confidence.

“Shippy (McPherson) obviously sets the car up a bit differently, which has been a big part of that.

“We’ve got a bit of momentum, we’ve had a good Bathurst, a decent Gold Coast and are focussed on continuing that in New Zealand.”

McPherson switched from Prodrive to take up engineering duties on Lowndes’ car this year in place of Jeromy Moore, who has found success with Porsche in the World Endurance Championship.

Lowndes has a strong record at Phillip Island, where he has nine career victories, and Sydney Olympic Park, where he is a two-time winner.

“I’m really looking forward to the last two,” he added

“Pukekohe is the one where we need to get over that hurdle a little bit.”

Team-mate Jamie Whincup has one Pukekohe race win to his credit, scored in 2013, but failed to make the podium in any of the three races at the venue last year.

“I’ll always help out where I can, but at the end of the day we go out and race hard,” he said.

“We don’t fix the results. We both battle it out and where possible I’ll help #888 out where I can.”

Next Story Courtney eager to build on GC momentum