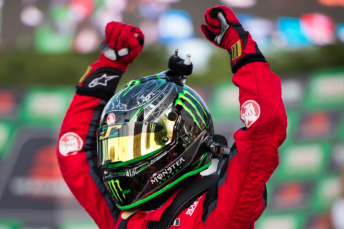 James Courtney is ready to continue his sterling V8 Supercars return at Pukekohe this weekend, despite suffering from back pain in the wake of the Castrol Gold Coast 600.

The 35-year-old revealed after his GC600 win that he expects to endure pain “for the rest of my life” due to the extent of the injuries he suffered at Sydney Motorsport Park in August.

Victory on the Gold Coast came just over two months after suffering five fractured ribs and a punctured lung when he was hit by pit equipment hurled into the air by the downdraught of a helicopter.

Ahead of this weekend’s event in Pukekohe, New Zealand, Courtney says he came out of the punishing Gold Coast event relatively unscathed.

“I went and had MRIs on Monday (after the GC600) and everything is where it should be,” said Courtney.

“I’m back on some anti-inflammatories just to calm down some nerves in my back and get that all under control.

“I’ll probably be on those for a while, but there’s no question we’ll be doing the race in New Zealand. That’s definitely on.

“We’ve got to keep the momentum and the ball rolling for the next one.”

Despite missing three events with injury, Courtney is still on course to score one of his highest championship finishes since joining the Holden Racing Team as the reigning champion in 2011.

Finishing 10th in his first two HRT seasons, Courtney recorded 11th in 2013 – where he missed the final round with a broken leg – and sixth last year.

Helping his team close the 421 gap to Prodrive in the teams’ championship is, however, Courtney’s main priority.

“I’m surprised we’re still in the 10 for the championship, seeing that we were out for 900 points,” he said.

“To still be in the 10 shows how strong we were going before I had the accident.

“The rest of the season is about chasing and seeing how far into the 10 we can get and also as for the teams’ championship, we’re not happy with second.

“We’re ahead of Triple Eight and now we’ve got to chase down FPR (Prodrive).

“I really think we can do it. Both Garth and myself are mad competitors and will be chasing those lads down all the way to the end.”

With the HRT traditionally proving strong at street circuits such as Surfers Paradise in recent years, Pukekohe will provide a solid test of the team’s true progress.

Courtney scored a podium at the Auckland venue last year, when the event was held in April.

“The car was pretty strong there last year and I think especially over the second part of the season we’re getting a little bit more speed out of the car,” he said.

“I think we’re in with a really good shot in New Zealand. It’s a crazy little circuit, quite high speed with a lot of bumps that move the car around a lot.”

Next Story Q&A: James Moffat on 'quickest ever' Volvo deal