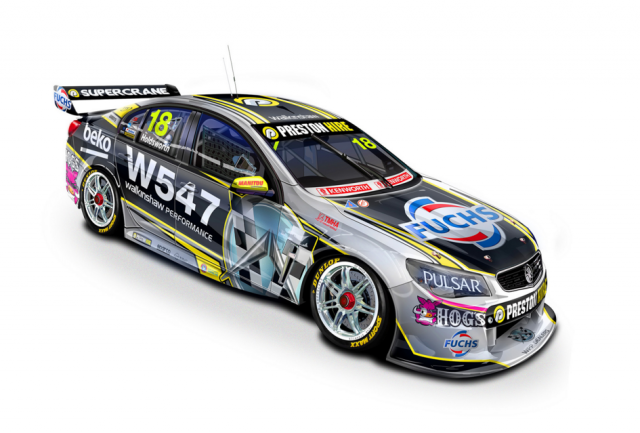 Charlie Schwerkolt’s Team 18 Holden will compete with primary sponsorship from Walkinshaw Performance Products for the remainder of the V8 Supercars season.

The Lee Holdsworth driven entry retains the base paint scheme it sported throughout the Pirtek Enduro Cup, where it was backed by Preston Hire.

Walkinshaw Performance had featured on the doors of the car earlier this season at Barbagallo and returns to promote its latest product, dubbed W547.

“We are very excited to showcase W547 on the sides of our #18 V8 Supercar for the last three rounds of the Championship, beginning in New Zealand,” said Schwerkolt.

“The Walkinshaw name is famous both on and off the track; and their team have used their background in motorsport to deliver the highest level of aftermarket modifications.

“This is the newest and most powerful Walkinshaw Performance package ever made, and the lucky customers who purchase one of these upgrades will have more power at their hands that what is experienced in our race cars.”

Holdsworth sits 16th in the championship heading to this weekend’s event at Pukekohe in New Zealand.

The 32-year-old is still looking for his first top six race finish with the Walkinshaw team, which he joined from Erebus at the start of the year.

Next Story POLL: Who will be NZ's next ATCC/V8 champ?