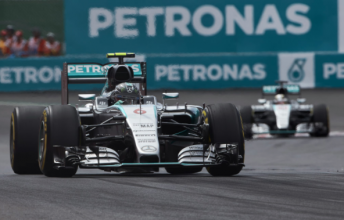 The Mercedes duo dominated the race with Rosberg holding an advantage over his team-mate from the outset.

In a bid to safeguard the result, Mercedes chose to pit its drivers for a second time prior to the Safety Car, which initially saw Hamilton controversially ignore the team order.

However, with Rosberg seemingly on course for a relatively comfortable victory, the race was neutralised when Sebastian Vettel’s disastrous afternoon came to an end after a high speed crash at the Esses.

Despite witnessing his three second lead over Hamilton evaporate, Rosberg managed to fend off his rival in the closing laps to take the victory.

Williams’ Valtteri Bottas capitalised on the Safety Car period to change to fresh tyres, which allowed the Finn to pass the Red Bull of Daniil Kvyat to claim the final podium spot.

Bottas appeared to be struggling in the latter stages of the race on worn tyres courtesy of an early pit stop.

Red Bull enjoyed one of its strongest showings of the season with Kvyat, who held third for long periods, coming home in fourth ahead of team-mate Daniel Ricciardo.

Ricciardo was lucky to avoid damage on the opening lap when he made contact with Vettel’s Ferrari, which resulted in a puncture for the four-time world champion.

Vettel never recovered from the incident as he suffered from a mechanical issue that appeared to be a contributing factor in his race ending crash on lap 51.

The second Williams of Felipe Massa finished in sixth aided by a stop from fresh tyres under the Safety Car.

It proved to be a nightmare day for Ferrari with the Maranello team suffering its first double retirement since the 2006 Australian Grand Prix.

Hampered by penalties for engine and gearbox changes, Kimi Raikkonen surged from the rear of the grid to seventh before he collided with countryman Bottas on lap 22, breaking his right rear suspension.

McLaren’s troubles continued with Fernando Alonso forced to retire with a MGU-K issue on the opening lap, while team-mate Jenson Button could only manage a finish in 14th position.