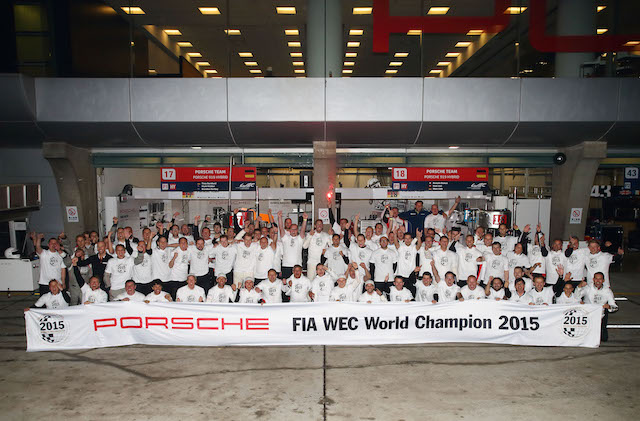 Porsche added to its remarkable sportscar record by securing the Manufacturers’ title in the FIA World Endurance Championship during a soggy 6 Hours of Shanghai.

In only its second season racing the class-topping 8MJ armed 919s which are considered to be the most technologically advanced competition cars ever made, Porsche is now on the brink of double WEC celebrations.

Webber, Hartley and Bernhard will go into the final round at Bahrain from November 19-21 with a 12-point advantage over their only rivals for the crown, the #7 Audi of Andre Lotterer, Marcel Fassler and Benoit Treluyer.

Armed with a hybrid system which generates energy recovery from both braking from the front axle and the exhaust, the 2-litre four cylinder turbo-charged combustion engine combined with the advanced lithium-ion battery is good for 1000bhp.

The timeline of how Porsche started on a journey to add to its first world sports car crown in 1986.

An office building and the workshop are built.   Timo Bernhard and Romain Dumas are announced as the first drivers.

Roll-out of the first 919 Hybrid at the test ground in Weissach with Timo Bernhard at the wheel.

Team preparation in Weissach ramps up. This has included among other key elements, 1053 pitstops practiced.

The driver combinations are confirmed: Webber/Hartley/Bernhard and Dumas/Jani/Lieb for the two full-time entries.

Porsche unveils the 919 Hybrid alongside the 911 RSR at the Geneva Motor Show.

The Porsche 919s make their WEC debut in the opening round at the 6 Hours of Silverstone with Webber, Hartley and Bernhard finishing third.

First pole position in the second race:  Jani/Lieb are fastest in qualifying in Spa-Francorchamps.

Webber runs deep into the race, placing second before the engine failed.

The 919s had earlier experienced fuel and suspension problems before re-establishing themselves as competitive units.

At the Fuji round, Webber establishes the fastest race lap in another first for the 919 Hybrid.

The 919s score their first double podium with Dumas, Jani and Lieb second ahead of Bernhard, Hartley and Webber.

Force India F1 driver Nico Hulkenberg is announced as driver of the third 919 for Spa and Le Mans in 2015. 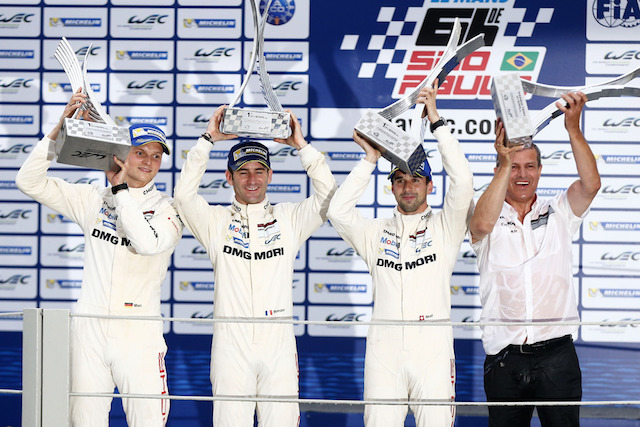 Porsche qualifies 1-2 in Brazil, the fourth pole for the 919.

The Dumas, Jani, Lieb machine takes the historic first win for the Hybrid.

Late in the race Webber is involved in a massive crash and is admitted to hospital for several days suffering from bruising and a headache.

Lieb turns laps of the upgraded 2015 Hybrid at Weissach. Porsche enter a third 919 for Spa and Le Mans this year. The move would prove a masterstroke

Kiwi Earl Bamber and Nick Tandy are confirmed to join Hulkenberg in the third 919.

The second generation 919 heads to Paul Ricard for the WEC prologue.

Pole for Webber, Hartley and Bernhard and second for Dumas, Jani and Lieb in Round 1 at Silverstone.

Webber, Hartley and Bernhard lead Porsche to a sweep of top three positions in qualifying at Spa.

The pole sitters finish third with Dumas, Jani and Lieb second behind the #7 Audi.

In the second qualifying at night Tandy secures third. 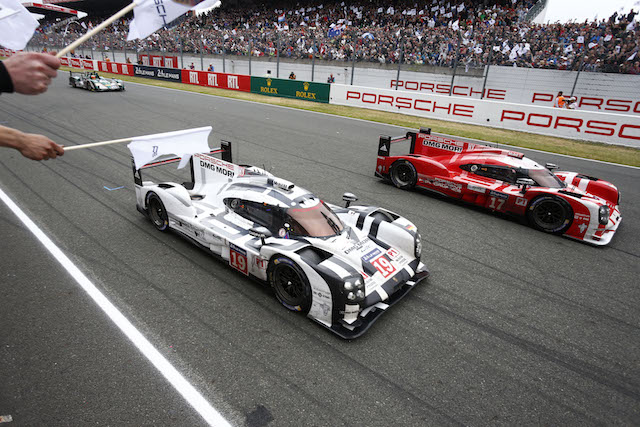 With a new higher downforce aero package the #17 of Webber, Hartley and Bernhard lead a Porsche one-two at the Nurburgring.

A second victory for the #17 at the Circuit of the Americas with the #18 mired in fifth after electronic glitches.

The #17 takes charge of the drivers’ standings by one point after Porsche realises a third one-two at a wet Fuji circuit.

The #17 claims a seventh pole from as many races this season. Porsche moves to an unassailable 308 points to win the Manufacturer’s Championship at Shanghai with Audi left on 238 with one round remaining.

The #17 919 takes a fourth victory and moves to 12 points ahead of the #7 Audi in the drivers’ standings with a maximum of 26 points available at the final race in Bahrain.

With 15 races since the 919 debuted in WEC, Porsche has amassed 11 poles, six wins, four one-two finishes, four fastest laps and one WEC crown.