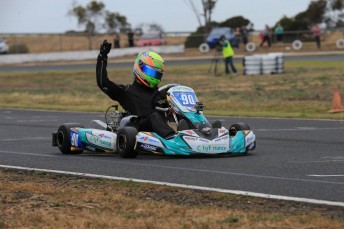 The Australian Karting Championship final in Geelong saw four of its eight classes not decided until the drop of the chequered flag in the finals.

The most dramatic of the weekend came in KF3 after Canberra racer, Zane Morse led the Title chase by nine points coming into the weekend. Not starting the second heat this morning and subsequent victory for closest rival, Reece Sidebottom put Tony Kart-mounted Morse on the back foot.

Sidebottom controlled the pace of the final to take a comfortable victory over local Dylan Hollis – his best KF3 Final finish and Queenslander Joshua Rogers. Needing to win and for Sidebottom to finish third or worse, Morse mustered fifth placing behind new Victorian Champion, Oscar Piastri.

In KZ2 yesterday’s switch in Championship lead from season-long leader, Jake Klarich to Jason Pringle continued today, with the CRG driving Pringle showing no nerves about the Championship position. He extended the lead to seven points after the third heat and then went on to put together a masterful drive leading home Dutch Ricciardo Kart pilot, Marijn Kremers and TB Kart’s Klarich.

In KF2 – Harrington Doyle Arrow driver Scott Sorenson was cruelly eliminated early in the final. A technical glitch saw the Queenslander unable to get away from the line and try as he might, he could not get the issue sorted, eventually pulling off to the side of the track.

His chief rival Liam McLellan – who was 16 points behind coming into the Championship chase – took off out in front and recorded an easy victory in his Holden Kart Team JC Kart. With Sorenson on the sidelines, it gave McLellan enough points to win his second Australian Championship by seven points. Dunlop V8 Supercars Series campaigner, Todd Hazelwood brought his Arrow home in second on his karting return with local driver, Zac Soutar third.

In an intense X30 Championship battle, Daniel Rochford was able to overturn Bradley Jenner’s hefty Championship lead. The weekend didn’t go right for Jenner from the very beginning and had to battle his way through from a deep starting position if he was any chance.

Clearing the pack, Jenner got to fourth whilst Rochford was embroiled in a battle with the FA Kart pair, James Sera (who was a single point behind Rochford coming into the weekend) and Morgan Feast. Ironically, a move on Sera for the lead by Feast opened the door for Rochford.

If Rochford won, Jenner had to finish better than fourth – fourth would give the Title to Rochford by one point. Try as he might, the young Victorian couldn’t work past Feast and in the end the Title crossed over to Rochford.

Jenner was in the middle of another tense battle later in the day. One point separated him and Formula K’s Adam Lindstrom in KA TaG. A great start by Jenner to take the lead at turn one and a spirited charge by Lindstrom saw the pair exit turn two first and second.

Lindstrom staged a hunt on the back of Jenner’s kart  and closed to within four tenths of a second as the laps were winding down, however Jenner did enough to hold on and make amends for the earlier disappointment.

Jay Hanson wasn’t letting his points lead get away from him, taking the round and Championship win over Cooper Webster and Blake Purdie after a wild push to the finish involving five karts.

James Sera continued to prove that he is one of the best in the business adding the first ever KA1 Championship to his extensive CV. Toby Pope and Justin Francis did everything in their power to knock the FA Kart driver off, however he had secured the Championship following the third heat this morning.

Pope would go on to win the final from Sera and Leigh Nicolaou.

Thus ends the first ever multi-round Australian Kart Championship, presented by Jayco and Castrol EDGE – terrific racing, the emergence of some new names and increased excitement among competitors, clubs and sponsors has placed the sport on a new level in 2015.

The Champions will be crowned this evening at a Gala Function at Simonds Stadium – the home of the Geelong Cats.

Next Story Slade's Supercheap Auto Performer of the Month