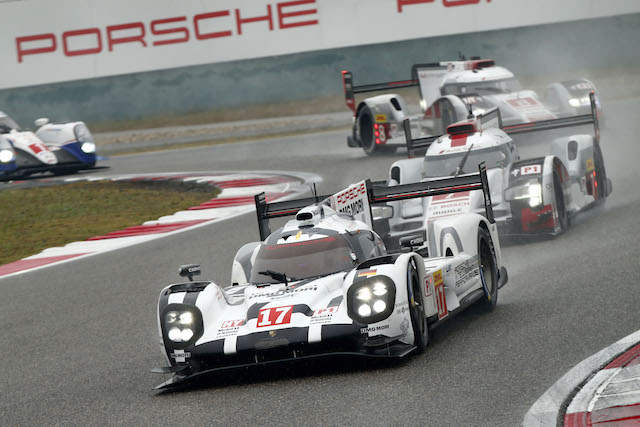 Mark Webber is tantalisingly close to scoring a maiden championship after helping his Porsche team to another victory in the World Endurance Championship at Shanghai.

Run in atrocious conditions before drying out in the latter stages, Webber, Brendon Hartley and Timo Bernhard soared to their fourth straight win.

It also served as Porsche’s fifth consecutive win following success at Le Mans in June with its part-time third 919 Hybrid while the marque also secured the manufacturer’s championship in China.

Webber completed the final stint after Hartley began the race in challenging conditions with Bernhard crucially coming up trumps in the middle stages after a titanic LMP1 battle.

Dumas led the way from Webber inside the last half hour, staying out to build up a cushion over the lead Audi and maximise Porsche’s points haul as the Frenchman still had to complete a final stop.

Porsche then called Dumas in with 15 minutes remaining for a splash and dash before emerging in second place, crucially in front of the Audi.

The result ensures the WEC driver’s title will go down to a thrilling final round in Bahrain with Webber, Hartley and Bernhard squeezing their lead out to 12 points over the #7 Audi.

Dumas had put a scare in the Porsche camp when he spun attempting to pass the LMP2 Pegasus machine which then let Fassler through to second place with just over 1:20m remaining.

Soon after Audi called Fassler in with the Joest squad electing to bolt on slick tyres in an aggressive call to take the fight to Porsche.

Porsche responded by calling Webber in to follow Audi’s suit with 72 minutes remaining before rejoining and protecting his lead.

The ex-F1 racer then turned up the heat by stretching his advantage to over 30s inside the final hour.

Webber had taken charge of the #17 with just under two hours remaining while Dumas settled into the #18.

The victory means that in the twilight of his career at 39, Webber stands to finally win a Championship.

Just after half-race distance Porsche double stinted both 919s on the Michelin rain tyres which enabled the #18 and #17 to increase their edge over the third and fourth placed Audis.

The first 12 minutes of the race was paced by the Safety Car before it peeled off, however not even a full lap was completed before a full course yellow was shown.

Marc Lieb had immediately snatched the lead away from Brendon Hartley however drama unfolded soon after when Lieb spun after contact from Lotterer.

Lieb was beached on a kerb before managing to free himself however by the time he rejoined he was at the back of the field before staging an electrifying fightback through traffic.

Soon after Lieb’s incident the KCMG LMP2 Nissan-powered Oreca at the hands of Nick Tandy spun and had to be pulled free from the gravel which ensured a truncated start to the race.

After going green for a second time Hartley led the Andre Lotterer which moved ahead of its sister car.
Hartley maintained station at the front before pitting and mirroring Lotterer by double stinting 1:15s into the race.

In LMP2 Tom Dillman took the win in the Signatech Alpine ahead of the G-Drive Nissan-powered Ligier driven by Roman Rusinov.

The WEC will reach its conclusion at Bahrain for Round 8 from November 19-21.

Next Story Rosberg holds on for Mexican GP victory