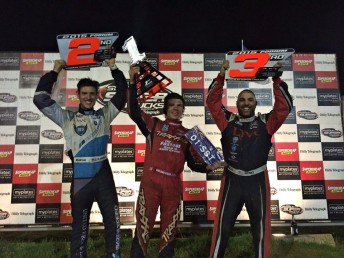 Sheldon Creed has backed up his two wins on the Gold Coast with two wins in Sydney, while Matt Brabham has recorded another podium and Adelaide’s Greg Gartner a race win at Valvoline Raceway.

Held under inclement conditions, a big crowd turned out for the Stadium Super Trucks/Sprintcars double header and they weren’t disappointed.

The final was a Stadium Super Trucks classic, with Creed leading for much of the race having started at the rear. The compulsory competition caution at the midway point closed the field and brought Robby Gordon into contention.

Gordon biffed his way forward turning around Scotty Steele before setting his sights on showstopper, Creed.

Paul Morris rolled his Supercheap Auto truck with three laps remaining, triggering a caution period that closed the field. It opened the door for a classic Creed versus Gordon battle.

The pair entered the final lap side-by-side with Gordon elbowing Traxxas-backed Creed only to have the recently turned 18-year-old San Diego, CA racer fight back – ultimately colliding with the Speed Energy truck of Gordon  and cutting the Series’ founder’s tyre down.

This opened the door for Matt Brabham in the Def Lepard/Live truck through for second and his sponsor/team owner Bill Hynes in for third – his first SST podium.

Earlier in the night, Adelaide’s Greg Gartner took the second race win. He led home Morris in an Aussie quinella and 17-year-old Scotty Steele – who was fast since arriving in Sydney. The race was conducted just on the 460 metre speedway with jumps as the infield section was too wet after a shower of rain.

In race one, it was Creed who won after qualifying fastest. He led home Keegan Kincaid and Matty Mingay.

Overall, Creed took the round win from Gartner and Paul Morris who was stoked with finishing on the podium despite the rollover.

“That battle with Robby was intense – normally I’d be able to see where he was, but it was that full of mud I could barely see anything and he got underneath me,” said Creed. “He squared me up real good and I looked at what was going on and thought ‘I can’t let him get away with with’ – so I had a crack back at him and gave it my all – we were able to get away with the win.”

Brabham was equally happy after his first race on the dirt:

“I was just trying to survive out there to be honest! I was avoiding the carnage and trying to keep it clean. By the final race, I finally felt as though I had racing on dirt figured out. I had an absolute blast and working out how to race on the dirt was awesome.

“I can’t thank Bill Hynes, Def Leppard and Live enough for putting this deal together and getting me back here to race.”

Gartner couldn’t believe how much fun the Stadium Super Trucks were to drive:

“These Stadium Super Trucks have a bunch of character and are just awesome fun,” said Gartner. “I’ve been fortunate that a great group of people have helped put this deal together with Robby, including the team at Clipsal 500 and Toyo Tires. It has been a new experience, my aim was to keep it clean – and in the second race tonight some of the old speedway experience came to the fore. I just love it, it’s been brilliant!”

The Stadium Super Trucks now head back to the States where they will race next week at the SEMA Show in Las Vegas. They are next scheduled to be seen in Australia at the Clipsal 500 in March next year.

In the Ultimate Sprintcar Championship fourth round, Garry Brazier took a come from behind win to defeat race long leader, David Murcott. The race ran trouble free from the second attempt at a start – after Grant Anderson rolled in turn one lap one – until five laps from home when Max Johnston pulled up on the backstraight. Brazier lined the Australian Champion up and gave him a big push into turn one – both drivers lucky to escape a rollover.

Brazier, the six time Australian Champion, secured his first back to back victory since 1997 at Valvoline Raceway with the win, before the two remonstrated down the backstraight, both cars ending up on one another before a heated out of car exchange.