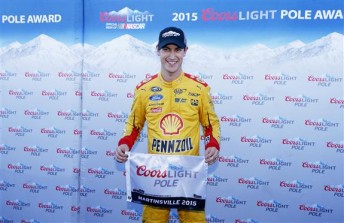 Joey Logano has swept both poles at Martinsville in 2015

Whether it’s superspeedways, intermediate tracks or as he proved today half-mile raceways, no one is hotter than Joey Logano who will start from pole at Martinsville.

Coming off three straight race wins, Logano snared the pole at the flat 0.526-mile Virginian speedway in 19.215 seconds in the final round of knockout qualifying.

Logano edged fellow Chase driver Martin Truex Jr. by .012 seconds in the race for the top starting spot for the first race in the Chase’s Eliminator Round.

The Coors Light Pole Award was Logano’s second at the ‘paperclip’, the first one having come in March of this year. It was the 14th pole of his career, six of which have come in 2015.

Grabbing pole in NASCAR has two crucial advantages; starting off the point and pit box selection. The Penske Ford will be serviced from the last stall on pit road on the tight Martinsville layout.

“It’s an amazing run we’re on right now,” Logano said. “This Shell-Pennzoil team is unbelievable. I’m just the lucky guy that gets to drive this thing right now.

“It’s so much fun. We’re doing everything right, right now, but all that can end in a blink of an eye, so we’ve got to keep our focus. Starting first here — anywhere here at Martinsville pays a lot bigger than most race tracks. Having a great pit stall and staying up towards front — as well as keeping your fenders on the car is important. I couldn’t be more proud of these guys as I am right now.”

Non-Chase drivers AJ Allmendinger and Jamie McMurray will share the second row with Jeff Gordon and Kyle Busch lining up behind.

The only major dramas in qualifying went the way of Kasey Kahne who found the fence and will start from the rear in a back-up car.