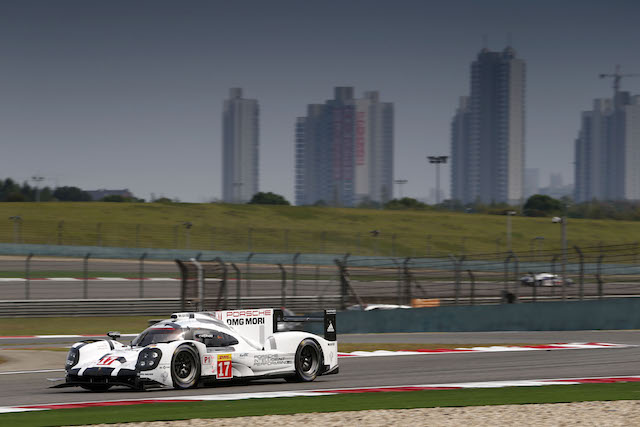 Mark Webber and Brendon Hartley have combined to supply Porsche with another pole position at the penultimate round of the World Endurance Series in Shanghai.

Sizing up a fourth straight victory, Webber and Hartley set a combined two-lap average of 1:42.719s to rubber stamp their edge ahead of the six hour race.

The #17 Porsche combination of Webber, Hartley and Timo Bernhard took the lead by one point in the drivers standings at the previous round at Fuji and earn a bonus point for the effort.

Marc Lieb and Romain Dumas, who did the qualifying duties in the #18 919 Hybrid will start from second in the machine they will share with Neel Jani after falling 0.76s short.

The #8 Audi R18 e-tron quattro of Lucas di Grassi and Loic Duval was third fastest ahead of the sister #7 machine which was qualified by Benoit Treluyer and Marcel Fassler who along with Andre Lotterer face a tough battle to retake the lead in the driver’s points.

G-Drive landed the top spot in LMP2 qualifying with the Nissan-powered Ligier of Sam Bird and Julien Canal setting a combined average of 1:52.763s.

The #51 AF Corse Ferrari 458 of Gianmaria Bruni and Toni Vilander clinched pole in the GTE Pro ranks ahead of stablemates Davide Rigon and James Calado.