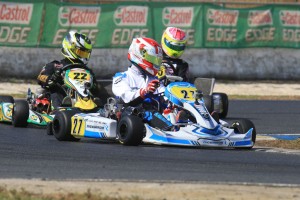 The final day of the Australian Kart Championships will see virtually every class come right down to the last race after a tense opening day of proceedings.

Intermittent showers bathed the Geelong venue keeping crews on their toes throughout the day.

The KZ2 Gearbox class had five drivers in with a shot of the title coming into the weekend and trouble befell many of the front-runners early. Kyle Ensbey had a collision with fellow Queenslander Jason Faint, whilst in the second heat, Chris Hays didn’t face the starter after a technical problem exiting the pits.

Patrizicorse Ricciardo Kart driver, Marijn Kremers got up to speed quickly, claiming pole and the first ever Aaron Ivermee Medal – struck in honour of former KZ2 competitor and Geelong Kart Club Member, Aaron Ivermee who passed away last year. Kremers went on to claim victory in both heat races.

In the other class racing, Brad Jenner – who led two Championships coming into the weekend – is under pressure. Jenner led both X30 and KA TaG Championships, but had just no form in the wet for qualifying. A technical issue in the second heat of X30 put him out of the race.

His title rivals Adam Lindstrom in KA TaG (Formula K Kart) and Daniel Rochford (X30 – Monaco Kart) both had strong runs going. The KA TaG heats were shared by Bryce Davidson and William Hawkes, whilst Morgan Feast took both X30 heats and has done his best to give FA Kart the strongest opportunity to challenge Arrow for the Manufacturer’s Championship.

James Sera has managed to finish both KA1 heats in second position after qualifying 11th quickest this morning. He held a 34 point advantage coming into the weekend however chief rival Justin Francis has scored a first and a third, while Toby Pope won the second heat after not finishing the opener.

A terse battle in KF2 is looming between Scott Sorenson and Liam McLellan for the Title. They were separated by 16 points at the start of the weekend, however both have been up for the fight with McLellan throwing everything he has at Sorenson and the Queenslander returning serve just as well. They shared the wins today.

Dunlop V8 Supercar Series campaigner, Todd Hazelwood is acquitting himself well on his karting return, whilst Zac Soutar led most of the second heat and is showing some good pace.

Championship leaders in Junior competition – Jay Hanson and Jack Doohan both took wins in their only heats of the day. The KA12 heat won by Hanson had a strong five kart battle that looks likely to go for the entire weekend. Hanson was 23 points in front at the beginning of the weekend.

Very little could be gained from the KF3 race this afternoon. It started raining as drivers took to the circuit on slick tyres and it created a nightmare for the youngsters – conditions changing every few laps. Local driver, Dylan Hollis took a dominant win, however Championship rivals Zane Morse and Reece Sidebottom – who were separated by nine points – both held their steel on track to finish the race. The category promises to go right to the final lap tomorrow.

All of the Sunday action will be carried through a livestream on karting.net.au.