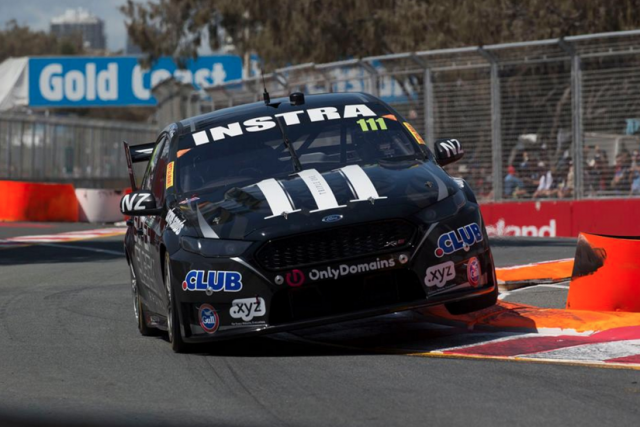 Andre Heimgartner on the streets of Surfers Paradise

Super Black Racing owner Tony Lentino has affirmed his commitment to Kiwi drivers following talk that his entry could provide a home for David Reynolds.

Lentino is currently working to finalise a driver, team and Racing Entitlements Contract with which to continue his operation next year.

Lentino insists that a firm deal is yet to be struck with any driver, but is adamant that the team will remain true to its national origins.

Discussions are understood to have previously taken place between Prodrive and Super Black about fielding either Reynolds or Cameron Waters for 2016.

“There was a bit of talk we could do something else, but it has to be a Kiwi,” Lentino told Speedcafe.com.

“Andre is there, Chris Pither is there, Ant (Pedersen) is there. They’re all options.

“Hopefully we’ll have it all done in the next couple of weeks.”

Rookie Heimgartner has used the speed of Prodrive’s FG X package to qualify inside the top 10 on nine occasions during the year to date, but has converted just three of those into top 10 finishes.

In addition to experience, Pither can bring commercial sponsorship to the outfit, which has so far been almost solely funded by Lenitno and his IT companies.

An announcement that Lentino has purchased the #47 REC from Walkinshaw Racing is meanwhile expected to take place ahead of next weekend’s V8 Supercars event at Pukekohe.

Super Black entered the championship this year by leasing a REC from DJR Team Penske, which has already announced its plans to return to two cars for 2016.

While Walkinshaw is understood to have been keen to take over the running of the Super Black car as part of the REC deal, it appears unlikely that Lentino will cut ties with Prodrive.

The computing tycoon is a long-time friend of Prodrive co-owner Rusty French, who introduced him to the sport last year.

That leaves Walkinshaw with a three-car entry for next season, unless it can cut a deal to run another of the unfunded RECs currently entered elsewhere.