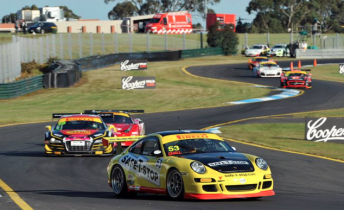 The flourishing Australian GT category is set to launch a new series next year in response to receiving record entries for the 2016 season.

Championship organisers have received a flood of registrations which has left them oversubscribed for the maximum 32-car grids by as much as 25 percent for the sprint series races.

Keen to accommodate all competitors next year, Australian GT has received approval from CAMS to form a new five round series which will operate as the Australian GT Trophy Series.

The series will cater for amateur graded drivers and will be part of the Shannons Nationals bill.

It will adopt Australian GT’s current regulations with races to include compulsory pit stops.

The Australian GT Trophy Series will be exclusively for Trophy, Challenge and Sports class GT cars with current specification GT3 cars not eligible to enter.

The formation of the new series will ensure the Australian GT Championship will consist of Championship class GT3 cars only.

“We are very encouraged by the amount of competitors coming on board for 2016,” category manager Ken Collier told Speedcafe.com.

“Registrations are well in excess of our maximum grid capacity of 32 cars for the sprint series.

“I feel we have an obligation to provide a competition for competitors and therefore we have negotiated with CAMS to have another series running exclusively on the Shannons Nationals calendar.”

Trophy and Challenge Class GT cars will still be eligible to compete in the new-for-2016 Australian Endurance Championship.

Collier confirmed that 30 entries have so far been lodged for the four round Australian Endurance Championship which begins at Phillip Island in May.

Full details of the new Australian GT Trophy Series is yet to be formally announced.