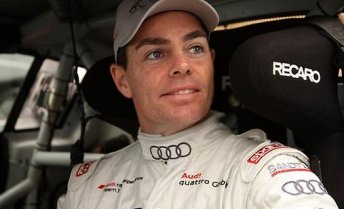 Craig Lowndes will return to Audi for next February’s Liqui-Moly Bathurst 12 Hour, the V8 Supercars star has confirmed.

The 41-year-old is set to pilot one of two new Audi R8 LMS GT3s that will be campaigned under Steve McLaughlan’s Jamec-Pem banner.

McLaughlan, whose team operates as part of the Melbourne Performance Centre’s Audi Sport customer racing program, will run one all-Australian and one international driver line-up.

German aces Christopher Mies and Christopher Haase have already been confirmed for the second entry.

Lowndes drove Audis in the Bathurst enduro from 2011-2013, linking first with German efforts from Joest and Phoenix before a single outing with MPC.

Scoring a best result of second in 2011, Lowndes returned to the event with the local Maranello Ferrari team in 2014, winning the race alongside John Bowe, Mika Salo and Peter Edwards.

“I’m really looking forward to rejoining the Audi Sport customer racing Australia team at Bathurst,” said Lowndes, who like his fellow V8 Supercars drivers missed out on racing in this year’s 12 Hour due to a date clash.

“For me there’s a little bit of unfinished business there after being on the cusp of victory a couple of times over the years (with Audi).

“I feel next year we have one of the most competitive new generation GT3 cars in the world and an opportunity to really take the fight to Ferrari and Nissan.”

Lowndes’ previous association with Audi included an ill-fated attempt at a VLN Series race in June, 2011, as well as a one-off Australian GT outing the following year.

McLaughlan says that Lowndes is a vital part of the team’s plans to capture a third 12 Hour victory for the manufacturer.

“When the opportunity came up to have Craig back in the fold, I knew we had to put it together,” Mclaughlin said.

“The new Audi has already proven to be a success, so we want to launch the new car here in Australia at Bathurst with the best chance of taking victory and, in my mind, that meant having Craig back in the team to go after that elusive third victory.”

Lowndes’ V8 Supercars team-mate Jamie Whincup tested an Audi R8 GT3 at Sydney Motorsport Park earlier this year, but has shot down suggestions that he is keen to make a maiden 12 Hour appearance next year.

The Australian and UK-based arms of Triple Eight have also shied away from entering their own cars in next year’s edition of the GT classic, despite publicly expressing interest in the 2015 event.