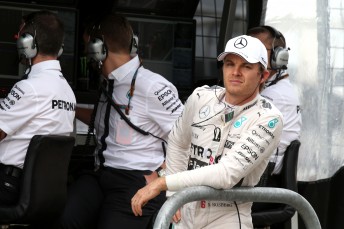 Nico Rosberg believes clear-the-air talks are required after describing Lewis Hamilton’s move at the beginning of the United States Grand Prix as ‘a step to far’.

The Mercedes drivers made contact on the run to the first corner resulting in Rosberg being pushed wide, dropping the pole-sitter down to fifth position on the opening lap.

Rosberg was clearly upset by the move which has left the German seeking an intervention from Mercedes bosses.

While upset by his team-mate’s actions, he admits it was his late error in the race that cost him victory on Sunday.

Running wide at Turn 16 while in the lead ultimately cost him the chance of a world title for the second year in succession as Hamilton’s win on Sunday wrapped up a third championship.

“I’m ahead mid-corner, and I have a right to the piece of track and he’s driving me off the road and banging into me.

“There was contact, it seemed quite heavy contact on the steering wheel because we banged wheels, so that’s not on.

“That’s one big step too far, which is not good.

“It needs to be discussed, and I’m not sure (what will happen) going forward.

“It wasn’t the key to the race because the main thing was my mistake which lost me the race.”

Mercedes boss Toto Wolff revealed his concerns of a repeat of the acrimonious atmosphere between the two team-mates following a collision at the Belgian Grand Prix last year.

Wolff says the matter will be discussed by the team in due course.

“It’s never easy for things to cool down. It wasn’t easy the first time around, but we have some experience,” said Wolff.

“We just need to have a calm approach, a firm approach of how we would like them to compete.

“Once the emotions have cooled down we will discuss.”