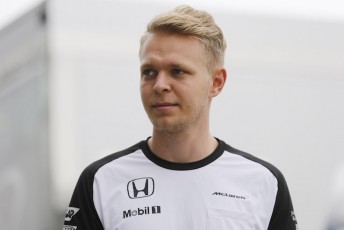 Magnussen is the latest driver to join a growing list of candidates as Porsche continues to search for a replacement for its Le Mans-winning ace Nico Hulkenberg.

The German Force India driver has been ruled out of defending his La Sarthe crown as the new F1 race at Baku, Azerbaijan, clashes with the twice-around-the-clock race next year.

Porsche LMP1 team boss Andreas Seidl confirmed Magnussen as the latest to audition for the WEC pacesetters via the team’s Twitter account.

Magnussen, who enjoyed just one full season of grand prix racing at McLaren last year, will join Kiwi Mitch Evans and Oliver Turvey, who were previously named for the test at the Catalunya circuit from November 10-11.

The son of ex-F1 pilot Jan Magnussen was notified on his 23rd birthday recently that McLaren would not be extending his contract with the Dane.

“We decided to give three young drivers a chance to test the Porsche 919 Hybrid,” Seidl said.

“The seat fit and simulator preparation is already done. We are looking forward to the test and will see what the future brings.”

Evans will also participate in a test of the 919 along with Team Penske IndyCar pilot Juan Montoya at Bahrain on November 21.