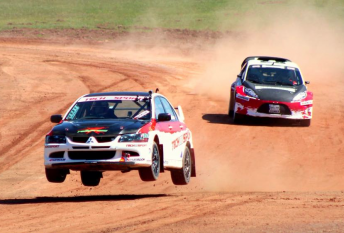 Extreme Rallycross series boss David Ridden says a lack of commercial viability forced the abandonment of the championship after just one event.

News of the championship’s demise came via a statement on its Facebook page last week.

The championship struggled to establish itself with only one of the 16 cars entered for the inaugural round at Lakeside Raceway’s new rallycross facility in September represented in the signature Supercar Lites category.

Alister McRae ran the single Supercar Lites class entry at Lakeside, however attempts for other Lites machines to join had been stymied by high costs.

Organisers were forced to cancel the second round at Calder Park and two pending rounds at Sydney Motorsport Park in September, before ultimately shelving plans altogether.

The news comes after the series lost its title sponsor Sidchrome, which pulled funding from the project earlier this month.

It is also a blow to Lakeside Raceway which had completed a purpose-built rallycross facility at the time-honoured circuit on Brisbane’s northern outskirts in response to a revival of the discipline.

Ridden said he had no interest in growing the sport from a grassroots level in Australia which played a part in the decision to abandon the championship.

“Obviously we weren’t getting the level of entries required for it to be a successful program,” Ridden told Speedcafe.com.

“We have come to a conclusion that there is not enough interest there despite all the interest at the beginning of the year when we launched. However, this did not turn into entries.

“To do that (grow rallycross from grassroots) from a commercial point of view is fine if you have volunteers and clubs to help out the event.

“But commercially you can’t get backing for those type of events and that means investors are not going to tip money into a local event with no return on it. It is a very long term return.

“It doesn’t make sense from a commercial point of view. It needs to be done by non-commercial identities.”

The championship’s final test day at Lakeside Raceway clashed with a round of the Queensland Rally Championship with the opening round held a week before Rally Australia’s WRC round at Coffs Harbour.

The series’ second visit to Lakeside Raceway in November was due to clash with the final round of the QRC.

Inaugural event winner Steve Glenney, who drove his Mitsubishi Evo to upstage McRae, learnt of the series’ demise when contacted by Speedcafe.com.

“Competitors can only hope that someone else takes up the opportunity to make it work because the formula is a good one,” Glenney told Speedcafe.com.

“Enough people weren’t aware soon enough and I think the event clashed with other meetings which didn’t help.”

While the news comes as a blow to rallycross’ rebirth in Australia, Ridden has confirmed his team are working through plans to host a one-off event early next year, which they hope will attract a host of international teams.

“We were looking to do this in 2017 but we have brought this forward due to the freeing up of time,” added Ridden.

“I am heading off to America to talk to some of the teams and hopefully we will have more to announce in November or December.”

CAMS announced earlier this month that it has put its plans to allocate a national rallycross championship on hold to instead focus on growing the sport at a grassroots level.

Next Story Rally Australia secured as final 2016 WRC round