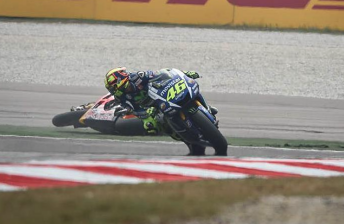 Valentino Rossi powers on as Marc Marquez falls from his Honda

The MotoGP title race has been blown apart following a controversial clash between championship leader Valentino Rossi and Marc Marquez at the Malaysian Grand Prix.

In one the sport’s most controversial ever moments, Rossi appeared to intentionally kick Marquez causing the Honda rider to fall as they disputed third place.

Race officials handed Rossi three penalty points on his licence which will see him demoted to the back of the grid for the title deciding Valencia finale next month.

The Italian was allowed to keep his third place finish in the race ensuring he maintained his championship lead over Lorenzo, albeit cut to seven points.

The severity of the penalty has divided opinion amongst the motorsport community.

Rossi, who has denied that he intentionally kicked Marquez, claims the penalty is “unfair” and has destroyed his chances of landing a 10th world crown.

The Yamaha has rider since hinted he may boycott the final round due to the sanction.

“For me this is unfair; as I just want to fight for the championship with Jorge (Lorenzo) and the better man win. Like this it doesn’t happen,” said Rossi.

Title contender Lorenzo however says the sanctions are not strong enough, stating Rossi should have been disqualified from the race, while accusing officials of leniency towards the fan’s favourite.

“To be honest, I don’t think it’s a good decision, because he takes out Marc, he crashes and gets zero points but Valentino keeps his 16 points,” said Lorenzo.

“He (Marquez) didn’t finish the race, gets zero points, Valentino should have the same. Other riders are penalised more harshly for being less aggressive than that.

“His (Rossi’s) name is important for the championship, so they (the officials) don’t take away any of his points. He will start last, but it’s not fair.”

Next Story Rossi's status had no impact in penalty call