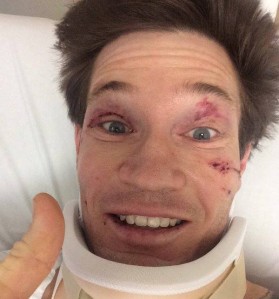 Jason Doyle has revealed the full extent of the injuries he sustained in his first corner accident in the final of the Australian Speedway Grand Prix at Etihad Stadium on Saturday night.

The newly crowned world number five from Newcastle suffered a broken C7 vertebrae and a punctured lung after being knocked out in the collision with eventual winner, Greg Hancock.

Doyle posted a photograph of himself in a neck brace on his social media account.

“Thank you everyone who has been concerned. I’ll be in hospital for a few days,” Doyle wrote on Twitter.

“I broke the c7 in my neck and punctured a lung. I’m one lucky boy.”

The Novocastrian joined the Grand Prix series as a wildcard in 2015 and has been guaranteed a place in next year’s series after a top five finish.

Chris Holder also directly qualified on Saturday night, just holding onto eighth position, whilst Troy Batchelor will have to rely on a permanent wildcard to continue his third season in the World Championship.

Elsewhere Sam Masters, also from Newcastle, has spoken for the first time since one of the most controversial incidents of the Don Smallgoods Australian Grand Prix.

In the second round of heats, Masters had a post race discussion with Dane Nicki Pedersen, which spilled into an all out war off track with Masters knocking over one of the three time World Champion’s mechanics.

Whilst regretting what he did, Masters claims he reacted after being provoked by the Danish camp.

“I do regret it, punching and that, but it’s what happened,” Masters told The Newcastle Herald.

“I was trying to get away but he kept pushing me and saying stuff. I just cracked it, but I shouldn’t have.

“His mechanic come and grabbed me and told me he was going to kill me,” he added.

“He wouldn’t leave me alone, then he pushed me in the shoulder, and I let it rip.

“I only threw my hands up at Nicki, then he came over to me, put his arms around me and said what he said.

“It’s obviously a big talking point but it’s a heat-of-the-moment thing really, and it’s what happens, especially with Nicki.”

The Don Smallgoods Australian Speedway Grand Prix has been confirmed to return to Etihad Stadium on October 22 next year.