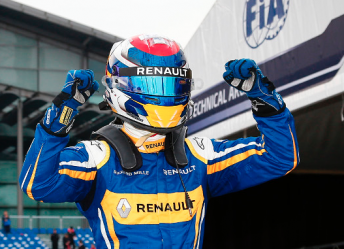 Sebastien Buemi opened the new FIA Formula E Season with a dominant victory on the streets of Beijing.

The e.dams driver was never challenged as he recorded a comfortable lights-to-flag win taking the chequered flag by 11 seconds from Abt’s Lucas di Grassi, with Mahindra’s Nick Heidfeld in third.

“It was a good race. It’s a bit of a weird feeling because I felt I was a little bit on my own, but I would not be against that,” said Buemi.

“It’s good to win with a bit of a margin.

“I’m happy, the team has done a great job and Renault has done a good power train so I’m just looking forward to the next races right now.

“I think we even managed to have the fastest lap, which was very difficult last year.”

The sister e.dams car of Nicolas Prost was involved in a scrap for second with di Grassi before a rear wing failure saw him retire, handing Heidfeld the final podium spot.

Loic Duval pushed Heidfeld hard in the closing stages but was forced to settle for fourth ahead of his Dragon Racing team-mate Jerome D’Ambrosio and Oliver Turvey.

The race was interrupted by two full course caution periods with the first deployed to retrieve Simona de Silvestro’s Andretti after she found the barriers at Turn 3.

A collision between Antonio Felix da Costa and Jacques Villeneuve was the reason for the second stoppage. The latter was a classified finisher in 14th position.

Reigning champion Nelson Piquet Jnr’s race was hampered by a freak mechanical problem that saw him come to a halt on track. The Brazilian eventually came home in 15th spot. 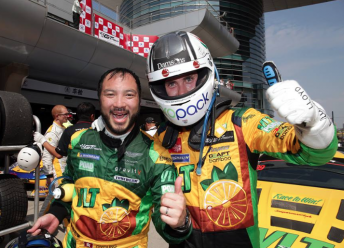 Craft Bamboo Racing’s Darryl O’Young claimed the GT Asia title with victory in the final race of the season at Thailand’s Buriram circuit.

The championship battle went right down to the wire with the Craft Bamboo Aston Martin of O’Young and Daniel Lloyd tied on points with the Absolute Racing Bentley Continental of Adderly Fong and Keita Sawa.

The opening race of the round saw Absolute Racing’s Duncan Tappy and Benny Simonsen convert a pole position into a victory.

Tappy and Simonsen took the chequered flag by 10.8s from the FFF Racing McLaren 650S of Hiroshi Hamaguchi and Alvaro Parente.

Title contenders Fong and Sawa came home in third while O’Young and Lloyd produced a fighting drive from the back of the grid to finish fourth.

With the title race delicately poised, O’Young and Lloyd produced a fine drive to take the victory in Race 2 to secure the GT Asia crown.

The duo crossed the line with a 7.2s margin over BBT’s Anthony Liu and Davide Rizzo, while Fong and Sawa had to settle for third.