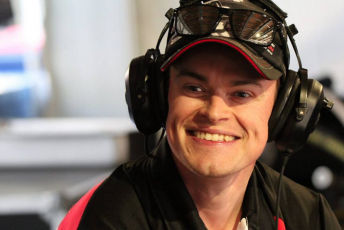 James Moffat has been confirmed alongside Scott McLaughlin at Volvo Polestar Racing for next season.

As revealed last week, Moffat heads to Volvo from Nissan Motorsport, which had been unable to offer a deal to the second-generation racer while it continues to chase sponsorship.

“At 31 years old I believe that James is in the prime of his career and I am confident that he will be a very worthwhile contributor to my team,” said Rogers.

Moffat has been racing in the V8 Supercars Championship full-time since 2011, spending two years at Dick Johnson Racing before his current three-year spell at Nissan.

”I am thrilled to join Volvo Polestar Racing and Wilson Security Racing GRM for the 2016 V8 Supercars,” he said.

“The team has shown great progress over the past two seasons and I look forward to driving the #34 Volvo.”

“I hope that I can see the #33 car in my rear view mirror now rather then in front of me,” added Moffat.

Volvo will mark the third factory V8 Supercars team Moffat has driven for, having competed in both the Development Series and endurance races with Ford Performance Racing in 2010.

Rogers’ team had confirmed last Friday that incumbent driver David Wall will step down from full-time duties next year, but could continue with the squad for the Pirtek Enduro Cup.

Next Story Persistence pays off for popular Perkins