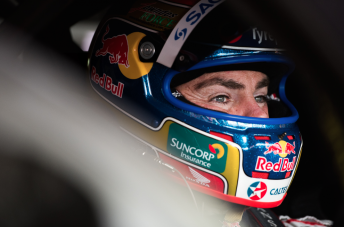 The veteran is just 256 points adrift of his rival after Winterbottom’s Prodrive outfit stumbled through its worst weekend of the season.

A total of 900 points remain available across the year’s final events at Pukekohe, Phillip Island and Sydney Olympic Park.

Lowndes feels he can mount what once seemed an impossible come-from-behind assault, but stresses that Red Bull cannot become fixated on its rival’s fortunes.

“The Gold Coast is always a tough weekend because of the nature of the track and I’m sure Frosty will bounce back, but we’ve just got to put the pressure on and see where we end up.

“At the end of the day all we can focus on is what we can do, which is qualifying up the front and trying to beat him in every race.”

Lowndes won the title in each of his first three seasons in the category with the Holden Racing Team between 1996 and 1999.

He has since finished in the top five on 12 occasions – including five times as runner up – without taking the elusive fourth crown.

Breaking through for another title as a 41-year-old would, arguably, be Lowndes’ greatest championship achievement.

“They are all special, but if we were able to achieve it, because there’s been such a long drought between them, there’s no doubt that it would be very special, especially later in life,” he admitted.

“We keep talking about the competition getting harder and getting faster and having a lot more depth. It’d be great to get a fourth, but there’s still a long way to go.”

Regardless of his battle with Winterbottom, it now appears certain that Lowndes will finish ahead of team-mate Whincup in the standings for the first time since their first season as team-mates in 2006.

Lowndes is 549 points ahead of Whincup, whose horror year has continued despite a mid-season team reshuffle designed to help the six-time champion’s side of the garage.

The turnaround in fortunes comes during the duo’s last season wearing identical colours before Lowndes moves into a third, Caltex-backed entry in 2016.

Sunday saw Lowndes and co-driver Steven Richards dominate the early stages before a mid-race Safety Car turned the 300km encounter on its head.

Although restarting in the lead, Lowndes eventually found himself in fourth after the third round of pitstops shook out.

“On the restart I burnt up the soft tyre too much trying to pull a gap on Scotty (McLaughlin), who was shadowing us,” Lowndes admitted.

“Doing that many laps around here on a soft tyre was always going to be a tall order, but I could have been a bit smarter about looking after it.”