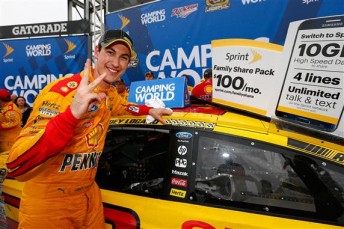 Video replays were needed to be used as Joey Logano won his third race in a row, taking the CampingWorld.com 500 at Talladega Superspeedway.

The final race of the next phase of the Chase for the Sprint Cup, Logano took the race win over Dale Earnhardt Jr. after a crash occurred behind him on the one-and-only ‘Green White Chequered’ finish.

Due to Logano taking the previous races at Charlotte and Kansas, a wide range of implications in terms of the championship would be on the line at NASCAR’s longest track.

With only two caution periods during all but the final five laps, all drivers were trying to position themselves for the finish.

One driver rolling the dice on fuel was Greg Biffle, who held a lead of over 30 seconds and appeared to be able to make it all the way. However, Jamie McMurray had an engine expire and a long clean-up period meant Biffle would ultimately have to pit for fuel.

With NASCAR deciding that just one attempt at a Green White Chequered finish would decide the race, cars were sent spinning as the pack bunched up coming to the green. However, this was not considered an attempt as the leader had not passed the start/finish line; so another re-start was made.

On that restart Kevin Harvick failed to get away quickly and as the field headed towards Turn 1 a massive multicar crash occurred. The yellow lights came on and officials had to use video replays to confirm that Logano was the leader at the time.

That call meant Earnhardt Jr. was second and eliminated from the championship chase.

“I saw the lights come on when I was still in the lead and I thought we had it,” said Logano.

“It is all about how the timing loops are and the camera to make sure that is what happened. It is such a crazy race. That were such long green flag runs, you never see that. To pull it into victory lane here at Talladega is so cool.”

In terms of who is into the next stage of NASCAR’s version of the playoffs; the list is: