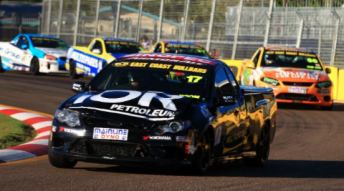 The Queenslander pleaded guilty at a stewards hearing last night on the Gold Coast for causing a crash during Race 3 at Mount Panorama.

Barbera made contact with Adam Beechey at Forrest’s Elbow that saw the latter collide with the outside wall.

The matter has since been referred to a disciplinary tribunal with stewards recommending Barbera is issued with a six month license suspension.

The Bathurst incident has also triggered a $5,000 fine that was issued on a suspended basis for a similar incident in Townsville earlier this year.

Barbera paid the fine this morning to allow him to race in today’s final 12 lap encounter.

The disciplinary tribunal is set to be heard within the next 3-5 weeks.

Next Story Russell scores V8 Utes round win on debut