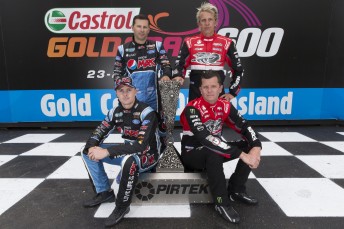 Five driver combinations are in contention to claim the Pirtek Enduro Cup ahead of today’s final race at the Castrol Gold Coast 600.

Saturday’s eventful 300km race on the Surfers Paradise streets has seen the Holden Racing Team dup of Garth Tander and Warren Luff move to the top of the standings following their fourth place finish.

The HRT pair have opened up a six point lead over the Prodrive pair of Mark Winterbottom and Steve Owen, who were forced to witness their lead evaporate following a collision with Tander in the pits during Saturday’s race.

Tekno Autosports’ Shane van Gisbergen and Jonathon Webb have emerged genuine contenders after producing a faultless drive to victory in the opening leg of the Gold Coast 600.

With 150 points available in today’s Pirtek Enduro Cup decider, the duo, who have won twice on the Gold Coast streets, sit only 30 points adrift of leaders Tander and Luff.

Also in contention to claim the prize is the Bottle-O Racing’s pairing of David Reynolds and Dean Canto, who are 54 points back courtesy of a hard fought second place finish on Saturday.

Craig Lowndes and his partner Steve Richards are the final combination with a mathematical chance of securing the silverware.

Lowndes has tasted victory previously after winning the 2013 Pirtek Enduro Cup alongside Luff.

The newly crowned Bathurst 1000 winners will require some good fortune to overturn a 57 point deficit.

The final race of the 2015 Pirtek Enduro Cup is scheduled to begin at 2.30pm local time.