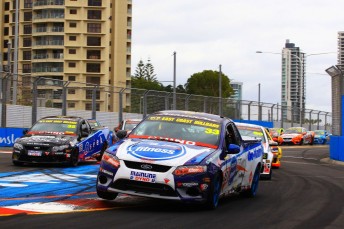 Aaren Russell his way to victory

V8 Utes debutant Aaren Russell secured a round win with victory in the final race of the Castrol Gold Coast 600 weekend.

The Dunlop Series regular completed a lights-to-flag win in a much cleaner race compared to the previous two encounters on the Surfers Paradise street circuit.

Russell was unable to relax throughout the contest with George Miedecke keeping the pressure on the Matt Stone Racing driver.

In the end, he held on to take the win by 0.8s from Miedecke while Nathan Pretty fended off David Sieders for the final place on the podium.

“I’m so rapt, I came here to learn the track to push for an Enduro drive here in the future and I never thought I’d walk away with the Round and Race win,” said Russell.

Saturday winner Gerard McLeod had held third in the early stages of the race but slipped back to fifth at the flag.

After being hit with a 10 place grid penalty, championship leader Ryal Harris produced a fighting drive to finish in 10th position.

Harris holds a 79 point lead over Miedecke, who has slotted into second, with Marjoram now 12 points further back in third.

The V8 Utes head to Sydney Olympic Park for a title decider from December 4-6.