Ogier clears out in Spain 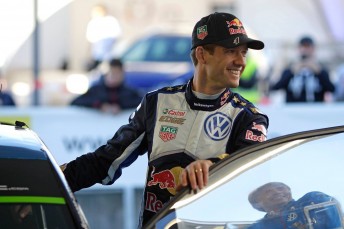 Sebastien Ogier has stretched his lead to almost a minute at the Rally Catalunya – Costa Daurada in Spain.

Having fixed the issue, the Finn attacked in the next test but an over-ambitious cut soon after the start proved his undoing. He hit a concrete block, smashed a wheel and lost 50sec driving the final 10km with a flat tyre.

It left Ogier clear, and three wins from four morning tests meant he could relax to reach the overnight halt with a 54.0sec advantage. He added a further two stage wins in the afternoon to his tally.

“It’s been a fun day,” said Ogier. “The car was perfect so it was fantastic to drive these great stages. Since I had a bigger gap over Jari-Matti I took it easier, especially in the dirty places, but when it was cleaner I still pushed. But we still have to negotiate 80km tomorrow.”

After yesterday’s mainly gravel roads, today was all about smooth circuit-like asphalt in the Tarragona hills and Latvala raced back from fourth to second by winning three of the final five stages.

Dani Sordo inherited second after Latvala’s drama but was ill at ease with an understeering Hyundai i20. Andreas Mikkelsen climbed steadily from sixth to demote him in the afternoon and finished 2.9sec behind Latvala, giving Volkswagen a 1-2-3, and 4.5 sec ahead of the Spaniard.

Hayden Paddon lost time after twice puncturing and that dropped the Kiwi into the clutches of fellow i20 driver Thierry Neuville. The Belgian was another to struggle with handling problems but the pair ended tied for seventh.

“We set some good times other than those issues and have shown a decent improvement compared to last year,” said Paddon. We were perhaps overdriving in places so we’ll push the reset button tonight and see what we can salvage tomorrow.”

M-Sport had a disastrous day. Firstly Ott Tänak retired from third after ripping a wheel from his Ford Fiesta RS when he hit a barrier and team-mate Elfyn Evans went out after nosing his car into a ditch. The Fiesta was undamaged but stuck.
Australia’s Brendan Reeves continues to sit third in the Drive Dmack Fiesta Trophy and 31st overall.

Next Story Evans takes a sweep at Rally SA