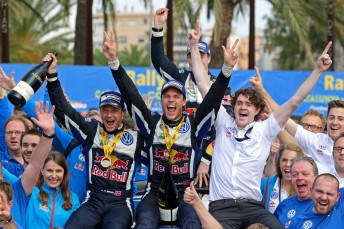 Mikkelsen and his crew celebrate

In a hugely dramatic finale, Mikkelsen and co-driver Ola Floene finished the last stage and learned they had edged Volkswagen team-mate Jari-Matti Latvala for what should have been second after a fierce final day fight.

Seconds later the Norwegian was informed that Ogier had smashed his similar Polo R into a metal roadside barrier less than four kilometres from the finish, ripping the rear right wheel from the car.

Mikkelsen was stunned into silence as he realised the significance of his colleague’s error. It was his first WRC win in 64 attempts and kept alive his hopes of pipping Latvala for second in the drivers’ standings at next month’s final round in Britain.

“It was absurd because Ogier never makes mistakes so when they told me I didn’t believe it. It was a big surprise, and although it’s not the way I want to win a rally, we’ve been so close so many times that I feel I really deserve this one,” said Mikkelsen.

Ogier was airlifted to hospital but was passed fit after checks. The 31-year-old Frenchman was seemingly on his way to an eighth victory of the season on the four-day mixed surface event south of Barcelona with a comfortable 50.9sec lead over Mikkelsen.

Mikkelsen and Latvala fought tooth and nail through the final leg and were less than a second apart before Latvala punctured three stages from the end. Mikkelsen then spun in the penultimate test and the duo began the final stage showdown 1.4sec apart.

The eventual winning margin was 3.1sec, with Dani Sordo taking the final podium place at his home event in a Hyundai i20, a further 18.1sec back.

Citroen’s Mads Østberg finished fourth after demoting team-mate Kris Meeke who spun his DS 3. The gap between them was 1.9sec, with New Zealand’s Hayden Paddon completing the top six in another i20.

“All in all, it’s not been a bad weekend, although there is always room for improvement,” said Paddon.

“We have tried to keep the pressure on the guys in front of us and I think we can be pretty satisfied with sixth.

Thierry Neuville’s hopes of a top six finish ended in the penultimate stage when a transmission problem pitched the Belgian off the road under braking. He limped through the final stage to take eighth behind Martin Prokop’s Ford Fiesta RS. WRC 2 winner Pontus Tidemand and team-mate Jan Kopecký completed the leaderboard.

Australia’s Brendan Reeves finished second overall in the Drive DMACK Fiesta Trophy category after moving up one spot on the final day.

“It’s been amazing to compete at Rally Spain and the feeling is even sweeter with getting second place in DDFT,” said Reeves.

“Now we need to see what we can work on for the future, but we certainly proved that we have great pace in the car and it would be great to get a program together for next year.”

The final round of the season is the gravel Wales Rally GB on 12 – 15 November.