McLaughlin strikes back for Race 27 pole

McLaughlin strikes back for Race 27 pole 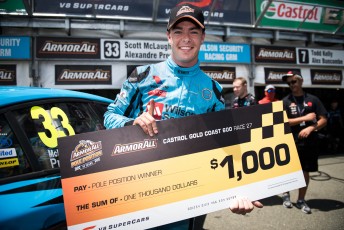 Scott McLaughlin put Volvo in the perfect position to avenge its Saturday disaster at the Castrol Gold Coast 600 by scoring pole for Race 27.

McLaughlin scooped the 13th Armor All Pole Award of his career with a sizzling 1:10.76s lap of the short street course.

The youngster had qualified second yesterday before splitter damage inflicted by co-driver Alexandre Premat in the first stint proved costly.

Craig Lowndes fell less than 0.1s shy of the Volvo at the end of the 20 minute qualifying session on his way to second ahead of Shane van Gisbergen’s Tekno entry.

Van Gisbergen led the way ahead of the final green tyre runs but, despite improving his own time, could not make it back-to-back poles.

Jamie Whincup scored fourth ahead of Mark Winterbottom and Scott Pye, who improved greatly from his 15th place qualifying effort on Saturday.

The Walkinshaw Holdens again showed promise before ultimately falling short of the front-runners.