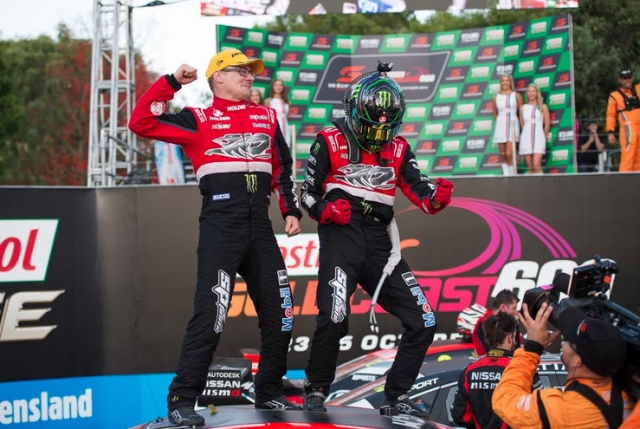 A mid-race fuel strategy call set up a sensational victory for James Courtney and Jack Perkins on the former’s return from injury at Surfers Paradise.

Entering the weekend under a cloud following a two-month lay-off, Courtney showed no signs of weakness as he conserved fuel to the chequered flag.

Rick Kelly/David Russell took second for Nissan ahead of Garth Tander/Warren Luff, who secured the Pirtek Enduro Cup on a fairytale day for the HRT.

Starting from 11th on the gird, Perkins held 10th through the early stages; a position that Courtney continued in once the minimum co-driver laps expired.

A debris Safety Car on lap 54 then turned the race on its head, triggering the entire field to pitlane for fuel and soft tyres significantly ahead of schedule.

Double-stacking hurt all of those running behind their team-mates, including Courtney, who rejoined the circuit 16th.

Returning for a splash of fuel before the Safety Car returned to pitlane however would prove the winning move.

Restarting 20th, the #22 Commodore eventually cycled to the front as others progressively made their third stops – the last of which came just five laps from the flag.

Kelly meanwhile elected against a splash of fuel at all, conserving throughout a near 50 lap final stint to score second in a car that had run 23rd after a torrid opening lap. 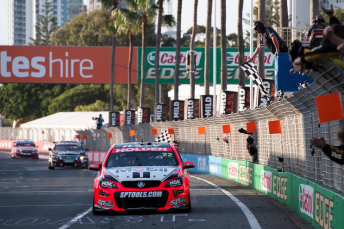 Courtney takes the flag for victory in Race 27

Tander led the majority of the race’s second half before peeling in for fuel with 10 laps to go and rejoining third, marking a three-place gain on where he’d run at the restart.

Eventual fourth place finishers Craig Lowndes and Steven Richards Holden had led the early stages and appeared on course for victory before the mid-race strategy twist.

Lowndes led at the restart before proving among the first to commit to the third stop, dropping him temporarily down the order.

The pole-sitting Scott McLaughlin/Alexandre Premat Volvo shadowed the Red Bull Holden from the outset, but eventually finished sixth after losing out late to a charging Shane van Gisbergen.

Mark Winterbottom’s championship lead was further eroded by a lacklustre run to 11th, while the sister Cameron Waters/Russell Ingall entry struggled for pace on its way to 19th.