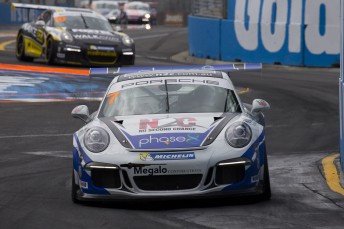 Campbell has gone two from two on the Gold Coast

Matt Campbell has made it two from two so far in the Carrera Cup on the Gold Coast, while a third place finish for Nick Foster has seen him crowned the series champion.

Campbell got the jump at the start from David Russell and was never headed throughout the 15-lap journey.

As it was in yesterday’s opening race, the focus became the performance of Foster and points rival, and defending champion, Steven Richards.

With Richards needing to finish ideally ahead of Foster, he went straight-on at turn 12 on the third lap and dropped back from eighth at the time to 12th at the finish. 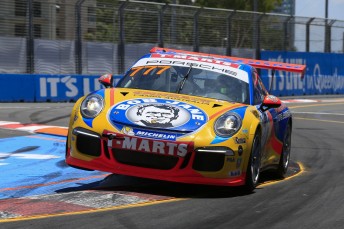 Foster is the 2015 Carrera Cup Champion

Not only did Richards lose his chance for the title, but a second place for Russell in the race also put him second in the points standings.

Third place for Foster in front of a pushing Craig Baird more than enough to ensure the title with one race later this morning.

In the Tag Heuer Carrera Challenge Tony Bates hit back from a gearbox issue in the opening race to take first place in the semi-professional ranks. Stephen Grove was second with James Bergmuller in third. Points leader Shane Smollen keeping it clean to be in fourth.

The final Carrera Cup race of the weekend and the season is set down for 11.10am locally.