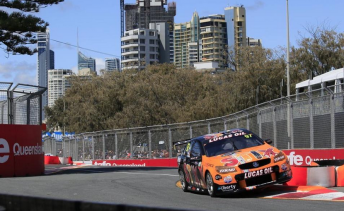 Shane van Gisbergen proved the fastest man in a frantic Gold Coast qualifying session that set the field for the Top 10 Shootout later this morning.

The Tekno Holden proved the class of the field on both green tyre runs during the 20 minutes, improving an initial 1:11.35s to 1:11.09s on his second set.

“Thanks to Geoff (Slater, engineer) because the car was mega the whole session,” said Van Gisbergen. “Hopefully we can do it again in the Shootout.”

Rick Kelly sprung the biggest surprise among the late flurry of fast times, shooting to third ahead of Scott McLaughlin, Tim Slade and Mark Winterbottom.

Lowndes sat just 16th after the first runs and, spearing down the Turn 11 escape road on his next flyer, looked to be out of business as the chequered flag flew.

The 41-year-old then miraculously squeezed into the top 10 with his very final attempt, bumping an otherwise impressive Nick Percat to 11th.

Others to miss out included James Courtney, who was fourth after the first runs but ended up 13th.

All three Brad Jones Racing Commodores were also down the order, while Cameron Waters’ first session as a primary driver for Prodrive saw him 19th.

The Shootout will get underway at 1120 local time.