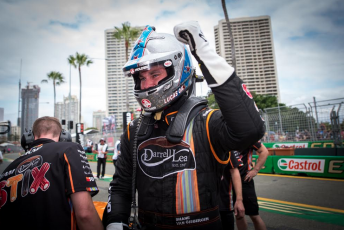 Shane van Gisbergen scored his first Armor All Pole Award of the season in the Top 10 Shootout at the Castrol Gold Coast 600.

The Kiwi was the final man on track after topping the earlier qualifying session and did not disappoint.

His clean and committed 1:11.54s effort proved 0.14s quicker than previous pace-setter Scott McLaughlin, who had been the seventh driver to put down a lap.

“The car has been awesome all weekend so to reward the boys with a pole is great,” said the Tekno driver. “Hopefully we can get the win this afternoon.”

Mark Winterbottom also briefly spent time at the top of the order before ending up third, sharing the second row with Rick Kelly’s Nissan.

James Moffat improved from seventh in qualifying to fifth ahead of Red Bull duo Craig Lowndes and Jamie Whincup.

Whincup’s lap was spectacular from the outset and eventually saw a major rear lock-up into the final corner, costing vital time.

First on the circuit, David Reynolds, ended up eighth, ahead of the Walkinshaw Holdens of Tim Slade and Garth Tander.