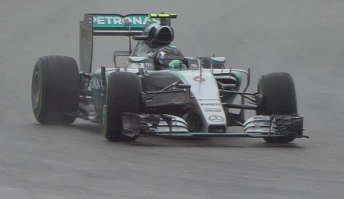 Nico Rosberg ultimately emerged as the pace setter in Friday practice for the United States Grand Prix after heavy rain forced officials to abandon the second session at Austin.

The Mercedes driver dominated the opening 90 minute hit out held in wet conditions, before a storm hit the Circuit of the Americas prior to the start of practice 2.

With the heavy rain showing no sign of relenting, race control was forced to cancel the session.

It is the first time a practice session has been scrubbed from the schedule since the 2004 Japanese Grand Prix.

A further bout of rain is forecast for Saturday which could affect practice 3 and qualifying.

Limited to just one practice session, Rosberg proved in a league of his own with the German posting a 1:53,989s effort on intermediate tyres.

The time proved to be 1.2s quicker than his nearest rival Daniil Kvyat with his Red Bull team-mate Daniel Ricciardo a further four tenths back in third.

The Red Bull squad elected against running upgraded Renault engines, with the team and its sister outfit Toro Rosso expected to utilise its older spec power units for the rest of the weekend.

Equipped with an upgraded engine, McLaren’s Fernando Alonso was ninth while Williams’ Valtteri Bottas rounded out the top 10.

Pastor Maldonado was the only driver not to post timed lap after his Lotus developed a gearbox issue.