Reynolds blocks out distractions for podium 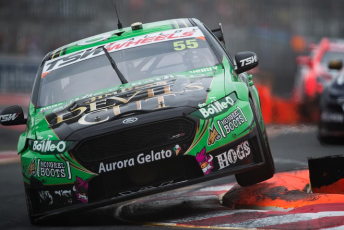 David Reynolds blocked out uncertainty over his V8 Supercars future to make a well timed return to the podium at the Castrol Gold Coast 600.

Following a fortnight filled with fallout over his Bathurst fine and rampant speculation regarding his future in the category, Reynolds held off Craig Lowndes for a fighting second place.

The result marked the first podium for The Bottle-O Ford in nine races and came on an otherwise disastrous day for the Prodrive outfit.

Post-race, Reynolds downplayed any suggestion that the circumstances have provided any extra motivation to perform.

“Every time you roll out of pitlane you want to be first and give it 100 percent,” he said.

“You’re always on show every time you leave the lane. The back room stuff can take care of itself next week.”

The 30-year-old paid tribute to the efforts of long-time co-driver Dean Canto, who carved through from eighth on the grid to fifth in the opening stint.

Canto appeared lucky to survive an early clash with Paul Dumbrell when the pair made contact into Turn 11.

Dumbrell had lost momentum during a separate clash with Taz Douglas earlier in the lap and later suffered major damage when he turned in on Canto.

“I could see he was thinking about turning in so I started to pull back a bit so I wasn’t squashed against the wall,” reflected Canto.

“In the end he turned himself around on the front of my car. After that he spun around and bounced off the back of me quite hard so I was surprised to keep going.”

The Bottle-O Ford’s co-driver also expressed support for Reynolds’ plight to remain in the category as a full-time driver.

“There’s a lot of guys that deserve to be out there, but Dave is doing a great job, he always has,” he said.

“He’s third in the championship and closed the gap to Craig then, although it wasn’t by much.

“He had a faultless run and his results speak for themselves. He’s doing the best he can. I think he’s doing a bloody great job.”