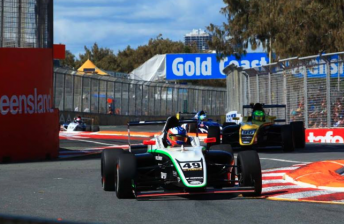 The Dream Motorsport driver completed a lights-to-flag win in the opening race before coming from behind to claim a frantic second 15 lap encounter.

Randle produced a faultless drive in Race 1 as he edged away from the field to take the chequered flag from title rival Jordan Lloyd.

Lloyd made the most of a strong start to pass Jimmy Vernon for second on the opening lap, but he was unable to catch Randle.

Vernon held onto third position to finish ahead of Tom Grech and Luis Leeds.

The second contest proved to be a thriller which began with Grech winning the drag race off the line to head Leeds on the first lap. Vernon slotted into third ahead of Lloyd and Randle.

However, the battle at the front was halted when the Safety Car was deployed to recover Zane Goddard’s car following his collision with the wall at the beach chicane.

Grech led once racing resumed but was under severe pressure from Leeds.

Behind, Randle managed to slip by championship rival Lloyd for fourth which sparked his charge to the front.

The complexion of the race changed when leader Grech suddenly slowed which handed Vernon the lead shortly after he slid by second placed Leeds.

A hard charging Randle quickly latched onto the back of Vernon before grabbing the lead with a well judged move at Turn 3.

Vernon then fell into the clutches of Leeds prompting a thrilling dice which ultimately saw the latter take second in a move that saw him cut the first chicane.

The battle for second allowed Randle to take the flag comfortably from Leeds, with Lloyd passing Vernon late on to secure the final podium spot.

The final Formula 4 race of the weekend is scheduled to begin at 1035 (local time) on Sunday morning.