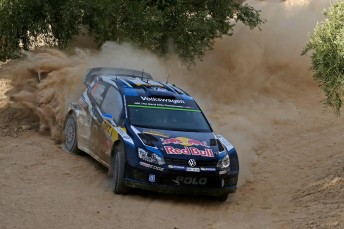 Ogier cut through to the lead in Catalunya

He heads Volkswagen team-mate Jari-Matti Latvala by 4.0sec after eight predominantly gravel speed tests in the hills south of Barcelona. Ott Tänak was third, 11.3sec off the lead in a Ford Fiesta RS.

Ogier, who led after Thursday’s curtain-raising street stage in the Catalan capital, won just one of the eight tests covering 128.60km. But his performances in the mixed surface Terra Alta, which ended both morning and afternoon loops, earned him top billing.

The 35.68km stage, the longest of the penultimate round of the WRC, contained a rough 6km asphalt stretch to break up the gravel. Tyre management on the abrasive roads was key and Ogier preserved his Michelin rubber to ensure maximum grip in the final gravel part.

Handicapped by opening the road on slippery gravel, Ogier lost his early lead to Robert Kubica. He regained it in the first run through Terra Alta, only to lose it to Latvala before winning the second pass to move back in front.

Latvala was disappointed with a cautious start which left him seventh. A more aggressive attitude propelled him up the leaderboard, although he could not match Ogier in the long stage where dirt dragged onto the asphalt made conditions slippery.

Tänak won three stages, more than any other driver, and was less than a second off the lead before the final stage. However, the Estonian overused his tyres on the asphalt and fell back to third.

Spain’s Dani Sordo had a consistent day to hold fourth in a Hyundai i20, 26.9sec off the lead and 2.8sec ahead of Mads Østberg. The Norwegian won two stages in Citroën’s DS 3 and held second until a slow puncture cost nearly 30 seconds.

A subdued Andreas Mikkelsen was sixth, less than a second ahead of Hayden Paddon, whose pace placed him third this morning.

“It has not been so bad today considering how tricky the road conditions have been,” said Paddon.

“We would have liked to be faster, particularly in the long stage. It was all about managing our tyres this afternoon and the second run through Terra Alta was crucial. We are not a million miles away but there’s more to come, I’m sure.”

Robert Kubica led for two stages in his Fiesta RS until a double puncture dropped him out of contention. Another puncture this afternoon and a gearbox jammed in first in the final stage ended an ultimately disappointing day.

Lorenzo Bertelli was the only major retirement after rolling in the opening stage.

“Crazy to think as these were some of the roughest stages you could imagine,” said Reeves’co-river sister Rhianon Gelsomino.

“We are 21.6sec off the lead and close to second. Brendan has been clean, fast and smooth all day. You couldn’t tell he’s only done one rally and no testing in the past 12 months.”

Teams had an extended 75 minute service at the end of the day in which to transform their cars from gravel to asphalt specification for the final two days.