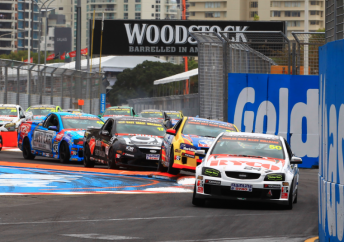 McLeod was never headed in a heavily interrupted race featuring two Safety Car periods before ending with a multiple car pile up on the final lap.

Kim Jane pushed McLeod hard throughout but had to settle for second in the end with Craig Dontas claiming the final place on the podium.

However, following a post race investigation Dontas was stripped of the third place finish after being issued with a 27 second penalty for his role in causing the multiple car pile up on the final lap.

“I started off the front row so I had the best possible chance.

“I just put my head down and there were a couple of safety car restarts there it got a bit hairy at the end but we fought hard.

“I had a good battle with Kim Jane and the car didn’t have a scratch on it.”

The first Safety Car period was called at Turn 4 on the first lap when Peter Burnitt and Charlie Kovacs made contact causing Bruce Oaklands to end up in the side of Burnitt.

Andrew Fisher did well to avoid the initial incident but when returning to the track contact from Kovacs, ended the Jesus Racing driver’s race.

The race was neutralised for a second time when Leigh Nicolaou and New Zealander Peter Ward were involved in a collision at Turn 11.

The incident saw the former make heavy contact with the barriers, firing him across the track.

Racing eventually resumed with one lap remaining but further contact between Mason Barbera and Dontas started a multiple car pile up that blocked the race track.

Nicolaou was later excluded from the race along with Kovacs who was also handed a $1000 fine.

The V8 Utes will return to action on Sunday morning for their final 12 lap race which is scheduled to begin at 1005 (local time).