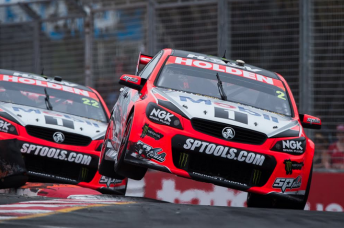 Tander and Courtney during their spirited battle

Tander and Warren Luff took the lead in the Pirtek Enduro Cup after finishing fourth in Race 26 at the Castrol Gold Coast 600 with Courtney and Jack Perkins fifth.

For the majority of their respective stints Courtney and Tander staged a heated battle for position that saw minor contact on multiple occasions.

While the results have seen the HRT move into second teams’ championship behind Prodrive Racing Australia, Burgess hauled both drivers over the coals in private immediately after the race.

“I’m not going to hold either of them back,” Burgess told Speedcafe.com.

“We never have team orders but we are borderline taking it too far.

“So I sat down with the pair of them and the fact that we are all employees and we are representing the team and some great sponsors it had to be addressed.

“Some days you’ve got to put that in front of your own personal agenda and they have got to respect each other.

“But when they are putting team results at risk it’s not acceptable.

“I think it was right on the edge of going past what’s acceptable on a couple of occasions.

“We probably gave away a podium there because our lack of thought.

“We live to fight another day. We are not happy with fourth and fifth. We are here to win races.”

Burgess did not try to apportion blame on one driver over the other but said the tactics on the track had been too risky.

“At different times of the race one was more guilty than the other,” Burgess said.

“Overall when you look at the whole race the pair of them made questionable decisions that put each other at risk.”

Tander elected to soften any acrimony between himself and Courtney, who came through his first meeting back from injury with flying colours.

“Yeah, we are cool. We are both hard racers,” Tander said when asked if he and Courtney had spoken.

The intra-team rivalry came in Courtney’s first race since returning from a two month injury lay-off.