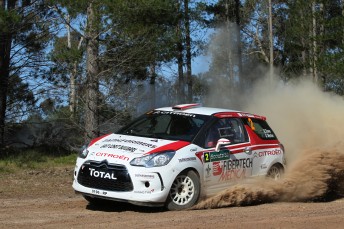 All he had to do was finish no lower than third place to guarantee the title but he did more than that taking the heat by 25.7 seconds over Steve Mackenzie.

Despite some stiff competition from Mackenzie and championship rival Molly Taylor, Evans controlled the leg. On the hard dry roads, including both the windy and open shire roads, Evans excelled and he was delighted to take the championship in style.

“What a feeling, I don’t even know how to describe it!” said Evans.

“It’s my third Championship now with Glen (Weston, co-driver). It’s a pretty proud moment. This year with Citroen, it was a whole new challenge, I hadn’t driven the car at the start of the year. To be standing here right now winning the Championship is something Glen and I worked hard to earn and I feel like we’re deserving winners.”

Bitter disappointment in the Classics with the one and only contender Jeff David retiring his Porsche 911 on the return to midday service with clutch failure.

Side-by-Side Champion for the fourth year in a row, Cody Crocker and Greg Foletta celebrated their latest memorable achievement overnight, and finished the day’s heat in second to Can-Am driver Nathan Chivers with Iain Hughes in third.

The third and final day of Scouts Rally SA begins with the fourth pass over the 20.45km Crawford stage, followed by a further six stages including two passes around the Gawler Showgrounds. The top ten fastest drivers from all categories over the weekend will then fight it out for the Gawler Cup.

Next Story Ogier clears out in Spain