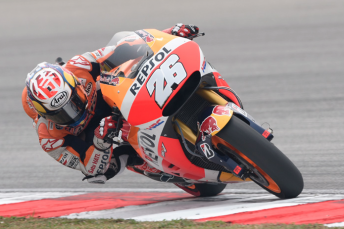 Dani Pedrosa produced an impressive ride to secure a commanding pole position for the penultimate round the MotoGP season at Sepang.

The factory Honda rider converted his blistering final practice speed into qualifying as he left the field trailing in his wake.

Pedrosa set the pace from the outset laying down a 1:59.053s effort with his first flying lap, which proved enough to claim his first pole position since the Grand Prix of Catalunya last year.

Such was the Spaniard’s pace, his nearest rival Marc Marquez could only get within 0.4s of his team-mate.

Championship leader Valentino Rossi claimed the final place on the front row, pipping his title rival and team-mate Jorge Lorenzo by 0.011s in the dying minutes.

LCR Honda’s Cal Crutchlow emerged as the best of the statuette team riders with the Brit hauling himself into fifth spot, ahead of the factory Ducatis of Andrea Iannone and Andrea Dovizioso.

Jack Miller will start from 16th on the grid following an eventful end to his qualifying session which saw his LCR Honda catch fire following a crash in Q1.