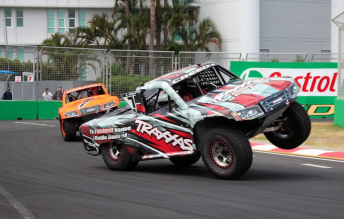 Sheldon Creed produced a perfect drive as he fended off Robby Gordon to win another action packed Stadium Super Trucks race at the Castrol Gold Coast 600.

Starting from third on the grid, Creed jumped into the lead on the second lap where he would remain for the entire race.

Such was Creed’s pace, the American opened up a five second advantage at the halfway mark prior to the competition caution.

The second half of the race saw Creed defend hard from a charging Gordon, who had surged through the field after starting from eighth.

Gordon piled on the pressure in the closing laps in a bid to force a mistake.

Creed did make one minor error upon landing from one of the jumps on the back straight, but he just managed to stop his truck from clipping the wall.

As a result, Creed held on to take victory from Gordon with Scotty Steele securing the final podium position in third.

There was plenty of action behind the battle for the podium finishers with Keegan Kincaid recovering from a spin into the wall to claim fourth.

The lose dropped Kincaid down the field but subsequent spins from Paul Morris and Matthew Brabham saw the American regain the spot.

Morris managed to recover from several hairy moments in the final laps to finish fifth ahead of Race 1 winner Burt Jenner.

Jenner had surged from the rear of the grid to fifth by lap six but a spin saw him drop down the order.

After finishing second in Race 1 Brabham enjoyed a solid first half to the race rising as high as sixth before he lost control in the final laps, resulting in contact with Morris and Matt Mingay.

The third generation racer eventually took the finish in eighth behind Mingay.

The Stadium Super Trucks will retain to action for two 10 lap races on Sunday.