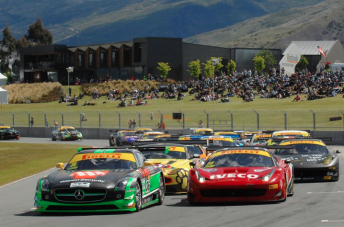 This year the pair will team up in Quinn’s McLaren 650S, which they shared at this year’s Phillip Island 101 in May.

The Kiwi will bring a wealth of experience to the team having raced for the Von Ryan Racing McLaren outfit in Europe’s Blancpain Endurance Series.

Fellow countryman Coulthard will swap his Brad Jones Racing V8 Supercar for an Audi R8 GT3 as he pairs up with the experienced Peter Fitzgerald.

The 28-year-old factory Audi pilot featured in the Phoenix Racing squad at this year’s Bathurst 12 Hour.

The Highlands 101 will also see Carrera Cup racer and GT driver Roger Lago make his competitive return after suffering a broken leg, fractured ribs and a punctured lung in a crash at Townsville in July.

Following a lengthy recovery period, Lago will team up with David Russell in the Lago Racing Lamborghini REX Gallardo.