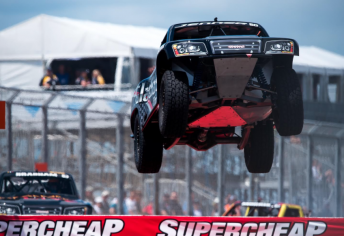 Burt Jenner on his way to victory

Burt Jenner managed to hold off a late charge from Matthew Brabham to win the opening Stadium Super Trucks race of the Castrol Gold Coast 600 weekend.

The American emerged in the lead prior to the final competition caution and despite seeing his lead evaporate, Jenner managed to hold on to take the chequered flag.

Starting from the second row of the reverse grid, Brabham followed Jenner home, while V8 Supercar veteran Paul Morris recovered from an early spin to claim the final spot on the podium.

The opening laps were full of action with Morris, Greg Gartner and Keegan Kincaid involved in an incident on the second lap.

The battle for the lead raged between Thomas and Steele with the latter finding his way through as the race ticked towards the halfway mark.

Meanwhile, Jenner and Brabham sat patiently behind before the former made his move for the lead.

Brabham followed through into second when Steele misjudged his line and clouted the wall at the beach chicane.

In the end, Jenner’s perfect jump from the final restart paved the way for victory from Brabham and Morris, who surged through he field to secure third.

Robby Gordon came home in fourth ahead of Aussie Matt Mingay and Kincaid.

Sheldon Creed was lucky to finish eighth after escaping a clash with the wall on the front straight after misjudging a jump. David Sieders snatched victory in a thrilling finish to the opening V8 Utes contest on the Srfers Paradise streets.

The Holden driver, who started from sixth on the grid, inherited the lead on the final lap when George Miedecke and Kris Walton made contact on the back straight.

Miedecke headed the field for the majority of the contest surviving two Safety Car restarts only for his race to unravel after the final lap contact.

Despite the incident, Miedecke managed to bring his iSeek Racing Ute home in second with Walton in third.

“Sixth to first in a hot field like that I had a bit of luck, and then the final lap I knew I just needed to be close enough to take advantage if Kris had a go, and Kris had a go so I got them both,” said Sieders.

Contact between Peter Burnitt and Leigh Nicolaou at Turn 11 caused the deployment of the second Safety Car.

Walton was penalised 10 grid positions for the Lap 1 incident while Nicolaou was handed a $500 suspended fine for the incident with Burnitt.

Sieders pulled number 12 out of the ballot draw, which will see Gerard McLeod start on the front row alongside 17-year-old rookie Mason Barbera for tomorrow’s Race 2 that will begin at 10:30am. The Dream Motorsport driver posted a personal best 1:17.4773s effort towards the end of the session which proved to be 0.2s quicker than Team BRM’s Lloyd.

Luis Leeds secured a spot on the second row in third, 0.7s adrift of Randle.

It proved to be an eventful day for Tom Grech, who will start from fourth on the grid, after being required to adopt a spare chassis following a heavy crash in second practice.

Will Brown was ninth while Jordan McGregor was unable to take part in the session.

The opening race is scheduled to start at 0920 (local time) on Saturday morning.