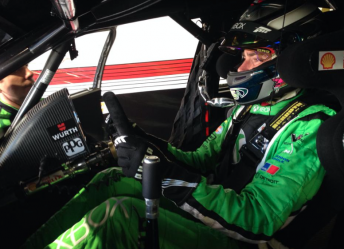 Scott Pye behind the wheel of the #17 Ford

Scott Pye set the pace in opening practice for the Castrol Gold Coast 600 despite feeling “pretty tender” as he tested out his fractured rib on the punishing street circuit.

Pye ran the bulk of the session in the DJR Team Penske Ford, setting a best of 1:11.7s on the soft tyre before handing over to co-driver Marcos Ambrose.

Steven Johnson has been placed on standby for Pye this weekend as the South Australian battles the rib injury he sustained at Bathurst a fortnight ago.

“The car is pretty good which makes my job a lot easier, but just that back chicane the car bottoms out and knocks the wind out of me pretty quickly,” he said.

“I want to drive more than ever, we’ve finally got the car to a position where we’re comfortable and I’m not handing it over without a fight. It’s a matter of just pressing on. 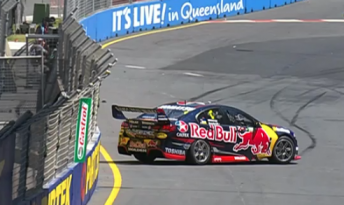 Whincup’s spin at the exit of the first chicane

“I’ll take some good doses and keep pushing. Sometimes it’s just about how bad you want something and I want it pretty bad.”

Lee Holdsworth, Tim Slade and Nick Percat all ran late laps on the softs to fill second through fourth, while Jamie Whincup was fifth despite an early end to his session.

The Red Bull driver tagged the wall at the exit of the first chicane, spinning his Holden down the road and damaging a suspension arm.

“This place is all about attacking the chicane and I gave it a little bit too much and just clipped the rear on the wall,” he admitted.

“Generally these things are pretty bullet proof but it’s bent one of the arms on the rear. We’ll replace that and PD (Paul Dumbrell) will be back out for the next session.”

James Courtney completed the entire session at the wheel of the #22 HRT Commodore and later reported no immediate problems with his own injuries.

“I think maybe later on it might flare up a bit but at the moment it’s perfect,” he said.

“To be honest before I got in I got a bit quiet and thought ‘geez, I hope everything stays where it should be’.

“But once I got out there and got into it your brain switches back and you’re thinking about the car.

“It wasn’t until the end of the session where I started to think about what I felt like.”

Tim Blanchard failed to turn a flying lap in the session as the team worked on issues with its back-up chassis, which has been pressed into action following the driver’s Bathurst crash.

Three more 30 minute V8 Supercars practice sessions remain for the day, with the next two to be run for the co-drivers only.