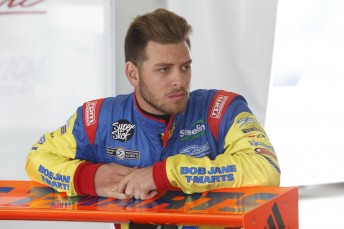 Points leader Nick Foster will start from the front row

Carrera Cup points leader Nick Foster has taken a major step towards securing the title with a front row start for the first race on the streets of the Gold Coast.

Foster’s main rival for the title, defending champion Steven Richards, will be forced to come from 10th.

In a dramatic 20-minute session, many of the big stars found trouble either spinning, or at least having to use escape roads after overshooting.

Many also had their best times erased after kerb strikes on the demanding Surfers Paradise layout.

Foster got one of the biggest scares when early on Russell spun exiting the first chicane. Foster was travelling behind and as Russell went around he nearly backed into the points leader.

Foster then set the fastest time before breaking what he believed to be a drive-shaft with only minutes remaining. In the closing seconds of the session Russell was able to come through and take the pole.

It was a frustrating session for Richards, who will start from the fifth row. A spin at the hairpin, and then a combination of kerb strikes and traffic not helping his cause.

The opening race of the Carrera Cup finale weekend will be Saturday afternoon at 1.15pm.