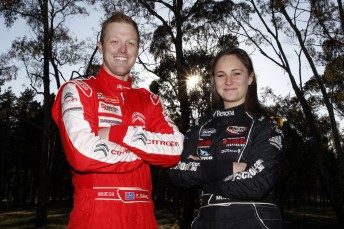 Evans has got the jump on Taylor at Rally SA

Eli Evans has started the Scouts Rally SA on the right note by taking maximum points on the Armor All & STP Power Stage.

Starting this weekend’s final Round of the East Coast Bullbars Australian Rally Championship with a 34-point margin over title contender Molly Taylor, Evans win of the Power Stage now extends that margin by an additional four points.

With Scouts Rally SA shifting dates this year, from its traditional mid-July to late October, drivers arrived at this morning’s 3-kilometre stage in Mount Crawford forest to find dry and dusty conditions.

Taylor was first up to the start line, determined to chip away at Evans’ points lead, but by the stage finish she was certain she hadn’t quite done enough.

“I tried to brake a bit earlier, keep it a bit cleaner. Our time is faster but I doubt it’ll be enough to stop Eli,” said Taylor.

“All we can do is to keep the pressure on and hope he makes a mistake. It’d be nice to take another rally win this weekend, and that’s what we’re here to do.”

Tony Sullens eclipsed Taylor’s stage time by over a second. The Citroen driver was fairly confident his teammate would have his measure.

His feelings were well founded, Evans powering through the stage to clock a time of 1m48.245s, over three seconds quicker than Sullens.

“What a relief!” said Evans.

“I really pumped myself up on the start line, I said I wanted to do a one minute forty-nine, then I totally messed up the first corner!”

The Scouts Rally SA action to get underway this afternoon, with three daylight stages run later this afternoon ahead of the twenty kilometre night time blast through the Mt Crawford forest after 8pm tonight.